Our utopian imagination has been dramatically atrophied in the asphyxiating atmosphere of an apocalyptic predication, to the point that it seems much easier to imagine a dying world rather a better one.
But it is precisely when utopia becomes unfathomable that it is necessary.
“Les Sentiers de l’Utopie”, Isabelle Fremeaux and John Jordan, La Découverte, Paris, 2011

Conceived and directed by Enrico Casagrande and Daniela Nicolò

Genesis of the project

«What happens now» is the question raised at the end of Alexis. Una tragedia greca, the last performance we built hunting down the traces of an Antigone in today’s world. Alexandra Sarantopoulou, on stage, states that, for her, the key of the answer to this questions lies in a graffiti that some young people did on a wall in Athens:

What has happened in Northern Africa, what is happening right now in Greece and is spreading across all of Europe is something that not even utopians and science fiction writers had considered so vividly; the presence of an extensive and critical mass of educated youths who decide to wake up and move the axis, placing themselves outside of the pre-established coordinates…
They place themselves in the future, because they are the future, a future which Huxley and Orwell had drawn in gloomy colors, but which maybe has some surprise in store?

Never would we have imagined that the research among Science Fiction authors – because originally we intended to work on Philip Dick and Aldous Huxley – would have thrown us in the opposite direction all the way into the 17th Century… But that’s how it went, discovering that the title of Huxley’s work Brave New World was a Shakespeare quote… On the spur of the moment, and without a safety net, we jumped into Nella tempesta, reading and rereading this undefinable and mysterious work, to find in it – transfigured – countless coincidences with the questions that had brought us to look for tools to read the present uncertainty through future prefigurations …

We set out on a journey, aware of its hidden dangers and dazzles, but determined to pursue an idea of theatre that plunges into the planet’s hot spots, so as to capture telluric forces and accumulate the energies needed to live “in a world in which we cannot adapt and that we cannot give up, as citizens, as society-makers.”

I cried to dream again
Caliban “The Tempest”, W. Shakespeare

Starting from the first lines of the play, the question of power and the loss of control explode violently: who can govern? Or better, is sovereignty needed at all? Where is the Master?
This question bounces back and forth between Gonzalo and the Boatswain, while the boat is at the mercy of furious waves in front of which the words of a chief are of no use…
… What cares these roarers for the name of King!
If the power of the Waves cannot be controlled, then maybe it is more important to find the physical intelligence to surf them, to know how to work with the wave… to let oneself be transported and then face it, alone or building lifeboats. To build together in order to better contrast new turmoils, more levels of havoc and many other storms, at the individual level as well as on the systematic one; the economic Macrotempest in which we are immersed, which can always brought back to the unconsidered use of financial power, as well as the eternal conflict between generations, fathers and sons, which we already faced on our path around Antigone…
And, last but not least, the tempest unsettles those who, as they overthrow the relationship between margins and central vision, try to question the principle itself of representation, in their possible relationship of subversion with reality and politics.

From this point of view our Tempest has immediately become the storm of a social and political universe to be completely re-founded through the contact with the diversity of an alien island and with the stranger inhabiting it. The island, in the Renaissance imaginary, is the utopian world as an alternative to authority, oppression, usurpation…as Gonzalo imagines it: «No sovereignty… All things in common nature…»
And, as Foucault, “the bomb expert” guiding this project, writes, this navigation evokes images of marginalization and movement or removal. One need only think of the Ship of Fools or the desperate rafts full of refugees that today drift towards the coasts of Lampedusa Island (which many critics even come to identify as “possible Shakespearian island”).
Our journey started from Carthage, from where the ships of the Tempest set sail, to follow one of the possible routes taken by migrants who – as stated by Adriano Sofri – « I cannot call desperate, because one needs to hope fervently on journeys like these. »

Then from Tunis to Lampedusa, identified by many scholars as “the possible Shakespearean island”. We have listened to stories of incredibly long journeys started in Sub-Saharan Africa, of inhuman detentions in Libya… Of dreams and hopes on the way to a “Brave New World” that ended up being a space held by CIE fences, or by the walls of the terrible Salaam building in Rome – the last stop of our journey – where asylum seekers are “stored just like animals.”

How beauteous mankind is!
O Brave New World that has such people in’t!
“The Tempest”, William Shakespeare

Creating a play-within-the-play, Prospero – as Shakespeare does – knows that it is not possible anymore to be only actors or spectators. This alternation or coexistence of roles is indicative of the uncertain, risky mobility of a life taken in an eminent political direction.
The dramaturgy then breaks on several fronts; the study of those mechanisms of “control of the body” has pushed us to remove Prospero’s character from the stage and place him, invisible, at the screen of a surveillance camera, or as a follow spot. It is “embodied” by a moving head acting as sixth actor on stage.

Light spots are more dangerous because they blind with their light: the follow spots’ cone prosecutes, ransacks, hunts, flushes out, then encircles and finally kills any desire of life and any love for knowledge. Nonetheless we should not believe the irreversibility of processes, a dark tempest that weighs on the present and completely darkens its sky…
“Luce rara. A political reading of La survivance des lucioles by Georges Didi-Huberman”, Monica Centanni

And the conflict becomes more extreme, also because we choose, as counter-text, the angry poetry of Martinican Aimé Césaire. With A Tempest, he shifts the weight to Africa and gives voice to Caliban’s proud desire of revenge, figure which he layers with Malcom X: the relationship of dependence of the ever existing controversy between violence and non violence. « Because there are many tempests, aren’t there? And mine is only one among many… » (Aimé Césaire)

Ariel/Silvia Calderoni moves the focus of the unknown dialogue with Caliban within the creative process of a small independent company like ours, where it is impossible to keep life and theatre apart…
It is then unavoidable that also Miranda’s unaware character short circuits with the actual biography of the actress inhabiting her, who is an active member of Teatro Valle Occupato. In this reinterpretation of ours, she inevitably becomes the spokesperson precisely of those who are engaged in the resistant libertarian microphysics of the “occupied” or differently managed places that support this project.
All the actors enter the work coming into contact with personal tempests. For Glen, a tempest is being ten and seeing. It’s a collapse, a fire, a truck ramming through the wall of an Embassy in Albania… The tempest is deciding whether to leave or to stay.
And Glen has decided to leave, head to Italy, as an illegal immigrant.
The Tempest is also listening again to the voice of Judith Malina of the Living Theatre, with whom we inaugurated the AnimalePolitico project during the summer of 2011. She talks of the necessity of unleashing storms, and not protecting ourselves, precisely in the moment when hurricane Sandy hit New York. We were there, with her, at the historical Living Theatre in Clinton Street, with The Plot is the revolution when it came…
With the echo of her voice, we plan small tempests to be triggered outside of the theatre, in the city. What matters is to break the daily order, like dragging a tree in the street… And that’s what Silvia/Ariel decides for, when she chooses independence and deserting, and abandons the stage and her Master to through herself into the Noise of Reality… And Caliban starts a solitary revolt, claiming his island, his freedom.
But what freedom?
The text has been betrayed. The show breaks apart. The actor playing Prospero dons his cloak. The great Panopticon that is the stage, where «each in his own place is seen, but does not see», becomes empty. There is only question left, together with Miranda’s shy exhortation to the audience.
In the silence.

The construction of a new space

And what is the first shelter for a defenseless body after a hurricane, a shipwreck or an armed conflict?
The most immediate answer was: a blanket. A blanket is also the simplest object to find and redistribute in every city… That is how we came to “the set” of Nella Tempesta: only blankets that we collect on each performance site.
We do not want to waste any more money on “dead sets”. Instead, we want to work with materials that, at the end of our tour (or even of every date), can be “donated” to independent spaces in each city that actually need them. This is why we invite all the citizen-spectators to come with blankets from home…
Why not trying to transform the theatrical contract into an open formula of reciprocal exchange, as we try to deconstruct from within the proxemics of the relationship between who acts and who watches? Let us try to use the “temporariness” of the staged event to create a different ZONE starting with our own life experience in the nomad, vagabond, unstable and … pirate community that we “uprooted” artists are a part of.
We, “the Communityless Community, the Community without the We-Community”, have realized that the truest form of involvement (beyond political activism) is the one we live on the stage, with the audience members of every city in which we move… as we try to build temporary temporary heterotopiae.

>It is our job to transform ourselves into fireflies and recreate in ourselves a community based on desire,
a community based on glares, on nonetheless dances, on thoughts to transmit.
To say yes in the night cut by glares, and not settle with describing light’s no that leaves blind.
“La survivance des lucioles”, Georges Didi-Huberman.

As “political animals”, we thus bring to the stage an experience of reappropriation, in the spaces, in the experiences themselves, always immersed in the Shakespearean tempest in which, let’s remember this, does not appear a world at end, but as Agostino Lombardo writes in the introduction to his translation into Italian, a world on the verge of a new beginning.

>The tempest is not, in this context, a goodbye to theatre,
but rather the ground for a new great theatrical proposition…
The proposition of a theatre that is not only show but also experience, not only imitation
or reflection or suspension or escape from every day life, but life in itself. “Introduction the Italian translation of The Tempest”, Agostino Lombardo 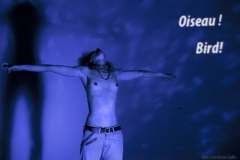 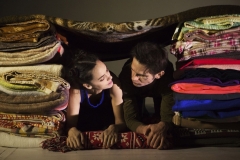 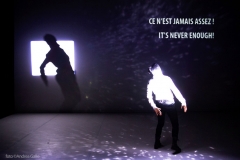 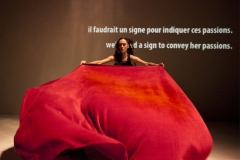 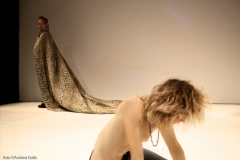 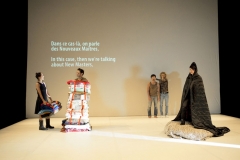 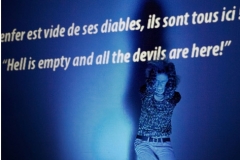 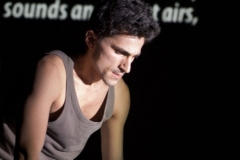 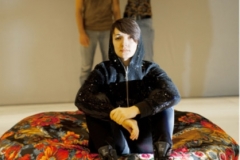 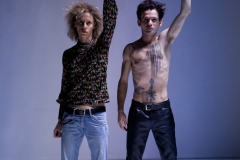 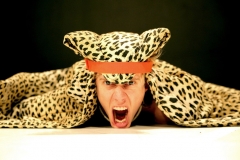