An installation devised by Enrico Casagrande and Daniela Nicolò

The show draws inspiration from but does not fully follow Don DeLillo’s extraordinary book White Noise, although it is actually and above all a pre-text for carrying out a work of narrative destructurisation.

The thematic choice however is central and of symptomatic significance: the Rooms project is only an ongoing reflection on death. Death in the west. Death of the west. In the arms of America. Amid the rubber smiles of today’s rulers… And this white noise in the background, which you hear everywhere, in all closed places with air conditioning, from shopping malls to hotel rooms… is the noise of death, the tragic sounding of that sense of perennial emptiness, of that inadequacy of being with regard to things, which becomes an existential condition in a critical period where being alive or being dead is the same thing (Pier Paolo Pasolini).

I kill you to acquire vital force (DeLillo), then I wash the bloodstains from the tiles: and no trace of your death. It’s a death that takes on incredible fascination even in its aesthetic side, it seems almost painted in a multidimensional picture, a limit point between being and not being, between reality and fiction: hence the decision to work on the very narrow borderline between real cinema and theatre. The room, precisely through the twofold connotation, assumes a new form of reality, violent, where existence and objectivity overflow the categories “true-false” and all the component elements interchange, as do the space/time coordinates, in a play of interlocks and destabilising relationships where cinema and literature converge, collide and blend.

As the final step of the project we reach the extreme point of elimination of the actors and the physical space they occupy: the aluminium room disappears and all that remains are the screens containing their digital presences: one for the bedroom and one for the bathroom, just as they normally stand, flanking or set above the real room. The room consists of two flat screens whichbroadcast the entire recordings of the show’s performance at Le Lieu Uniquein Nantes. Another 5 small synchronised monitors run the recordings of all the other film cameras which shoot the actors throughout the time of the show and which are edited live during the performance. We recreate what, during the show, enters and exits the video directing, in which differentiated sources of image flow together. More precisely:

1 – the shots by Barbara Fantini, the camerawoman with a Canon XL1 who from the stalls – with medium-close shots – follows all the movements of the actors in the bedroom;

2 – the shots by Daniele Quadrelli who, with a Sony 900, records all the actions of the actors in the bathroom;

3 – the POV-image of Vladimir Aleksic, the actor who with another Sony 900 acts directly onstage, dialoguing and relating with the actors in the guise of an ambiguous cameraman, a sort of interior Voyeur;

4-5 – the recordings of the small “bank type” surveillance cameras, situated respectively in the room and bathroom, which transmit a cold image, absolutely unpoetic and documentary, of the theatre process, distancing it, taking up a different viewpoint – yet still internal – from that of the public in front.

A sort of autopsy of the show, which thus appears torn apart and unveiled since all the backstage action and pauses are visible, something the theatre public is not accustomed to seeing. 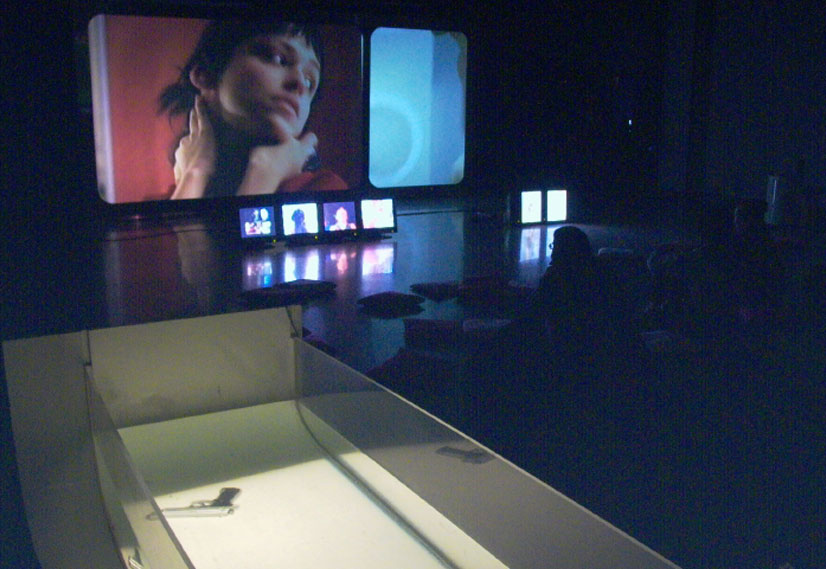 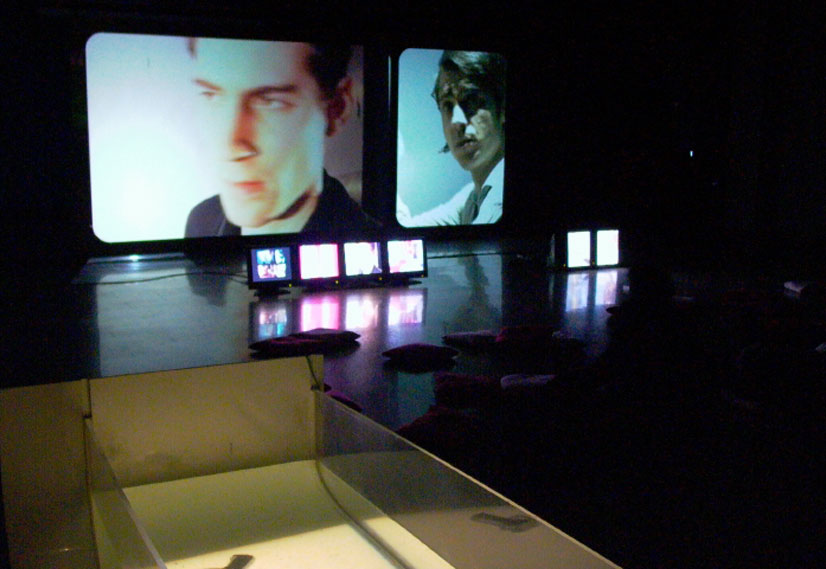 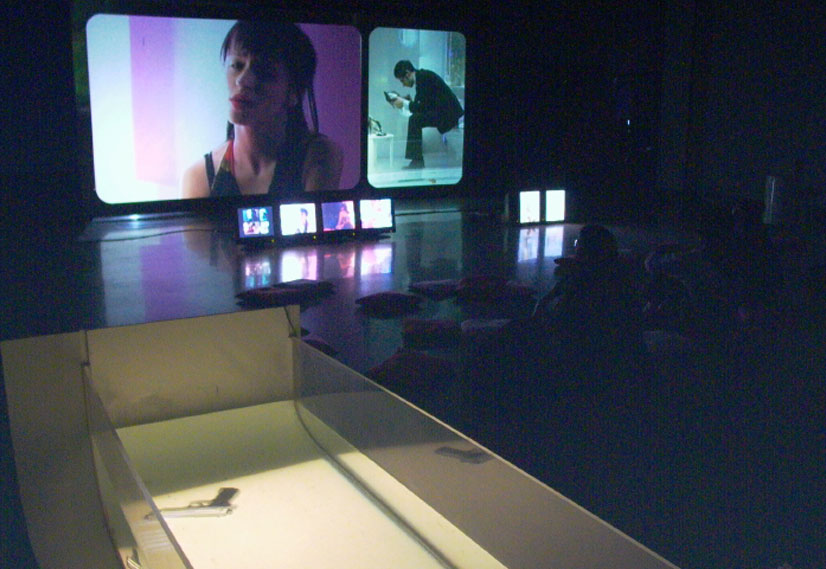 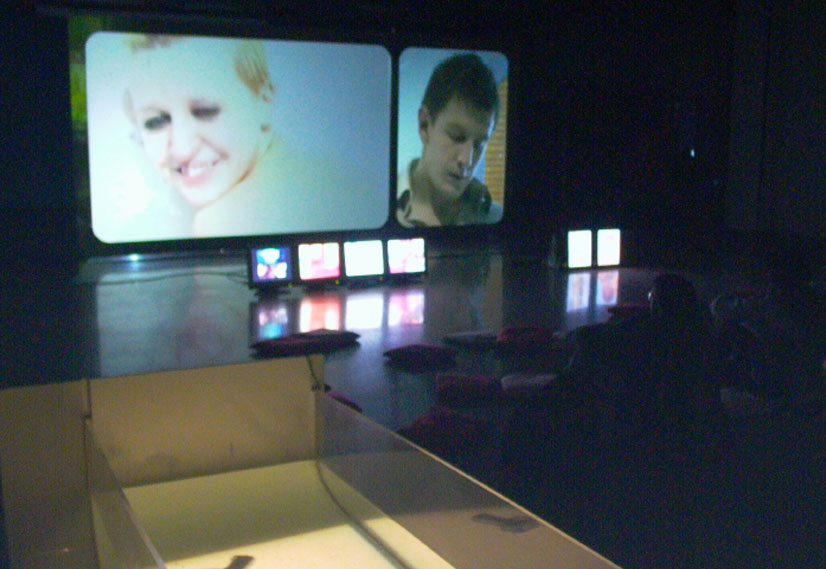 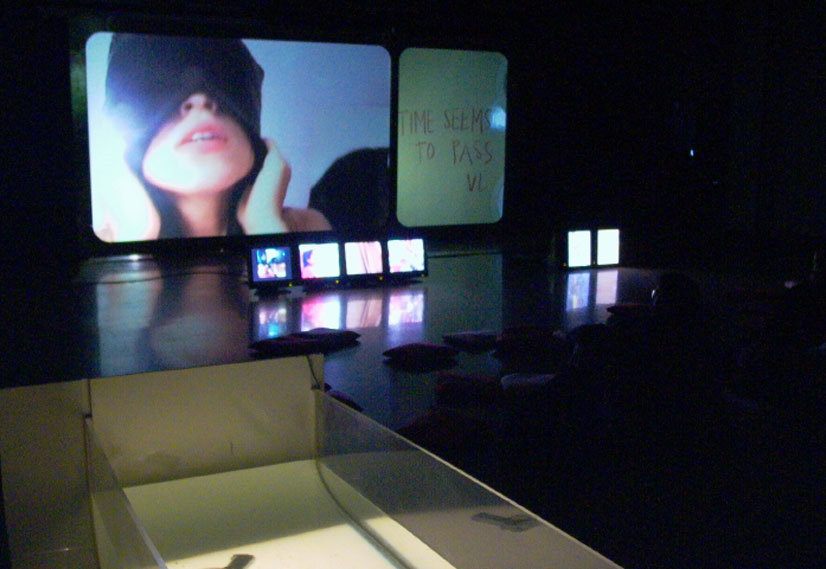 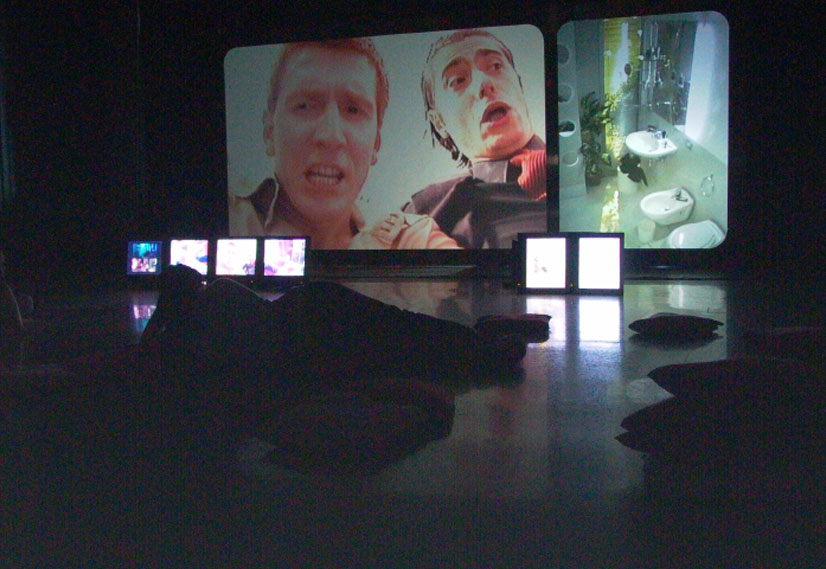 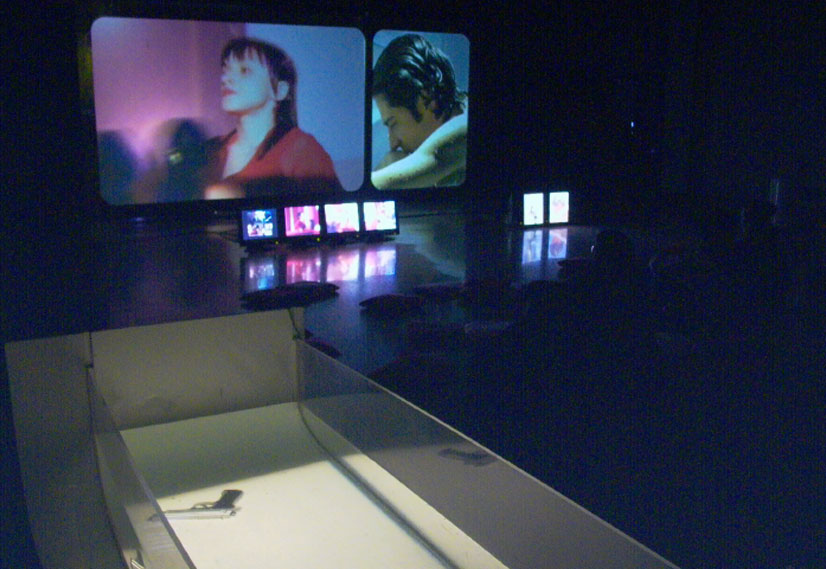 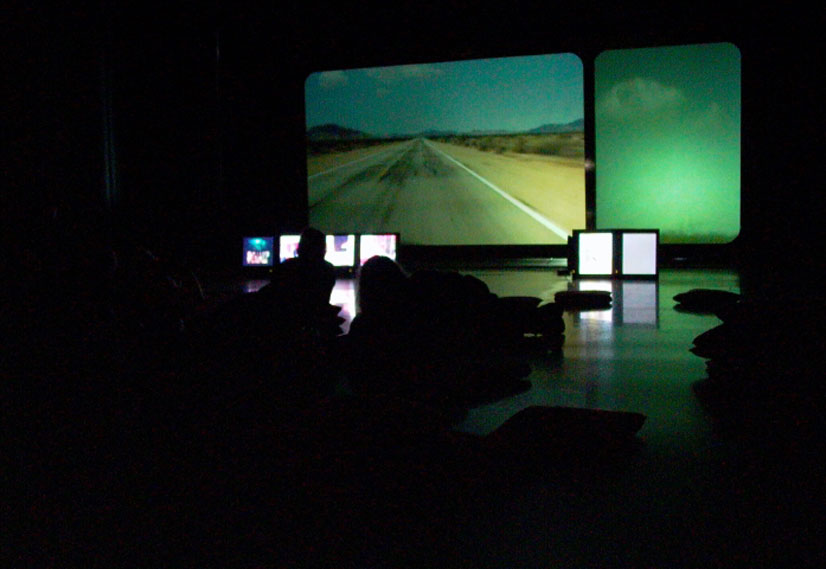 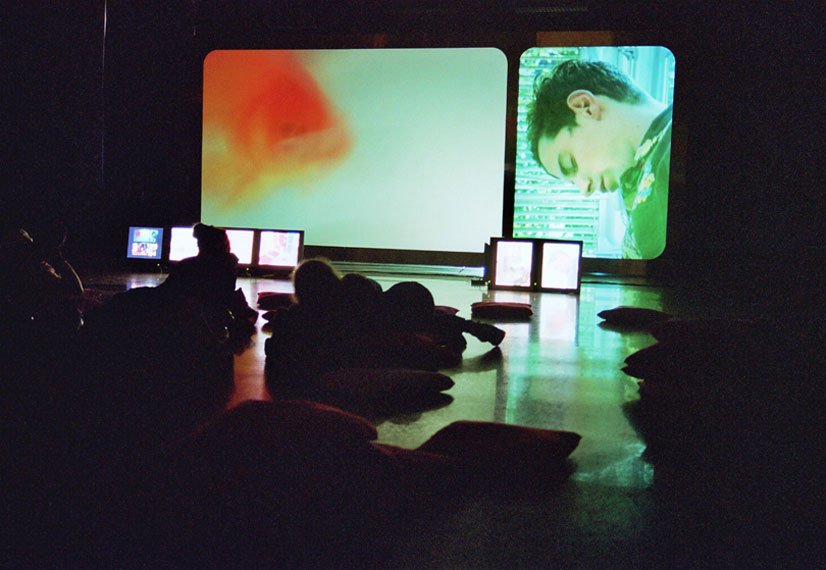