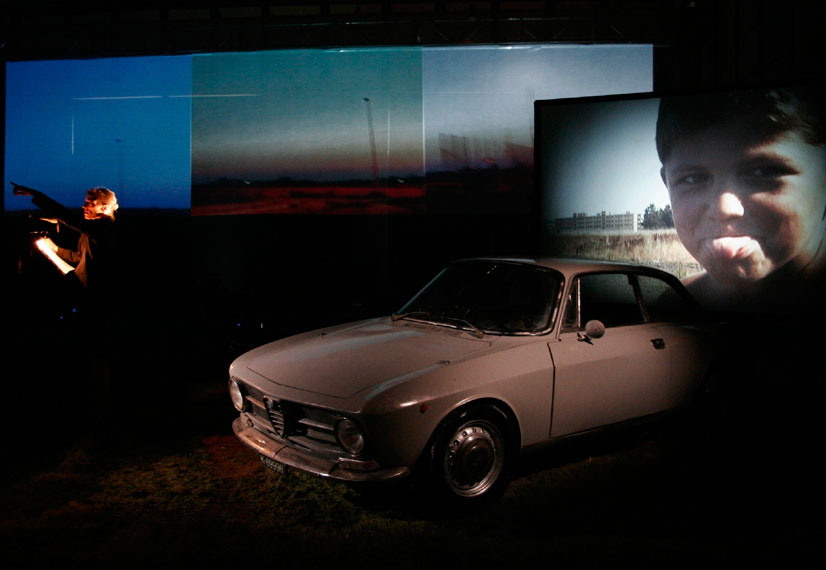 Motus&Pasolini “Ingenuous hopes, poetic myths of a soul which, in reality, is her, the guest, the poor visitor that nobody knows and that nobody feels has the right to be here.” Pier Paolo Pasolini, from “Poesia in forma di rosa”.

After the Rooms project, which involved anomalous and unprecedented research on the word, on an orality that is deeply felt and always hovering between aphasic renunciation on the one hand (Twin Rooms) and a taste for the rhythmics of the text on the other (Genet’s Splendid’s), it is almost an obligatory step to turn to that “poet of things” Pier Paolo Pasolini… to his caustic, critical glance at the contemporary. And then Motus is duty bound to question itself, through theatre, on the current political situation. Pasolini’s reflections on consumerist society and political life in general are now taking on an overwhelming, almost prophetic topicality.

We have decided to give voice to his voice, to once more host his cries of alarm, amplifying them with a mixture of means that were perhaps inconceivable in the days of his theatre experiences.

Moreover, given the growing fascination for the cinema, it seems to us inevitable to pay heed to his basic reflections on montage, which necessarily went hand in hand with literature and theatre, backing them up with a tough, in-depth semiological reprocessing precisely with regard to the relationships between these expressive spheres:

“…I changed technique fairly often: then, little by little, working in the cinema, getting more and more into it, I came to understand that cinema isn’t a literary technique, it’s a language in itself… and the linguistic instrument it’s established on is of an irrational type because it has a dreamlike character, because it’s close to dreams, because a film sequence and the sequence of a memory or a dream – and not only this but things in themselves – are deeply poetic… so for me theatre and cinema are very close to each other. The difference is that the theatre is a sort of plan-sequence, but it has many features in common with the cinema: both represent reality with reality, the body is represented with a body, an object with an object… when I write a scene for the theatre it is also a film scene, according to my conception of theatre, because everything I do consists in producing a film sequence formed by a very long shooting …”
From Pasolini on Pasolini, conversations with Jon Holliday, Guanda, Parma, 1992.

There’s no need to underline just how much we share these opinions: all Motus productions have been based on the same point of view which radically shifts the cipher of the event and places it on a highly stimulating boundary terrain.