Of the nightingale I envy the fate, the gods have provided him with wings

and with a very sweet song that covers every lament,

while to me the fate has reserved to be ripped apart

by a terrible double-edged axe…

To the animal sphere, the uncivilised, the wild, is traced Cassandra’s talent as prophetess. In the Oresteia, the coryphaeus compares her incomprehensible lament to the song of a nightingale: from the response of the “unheard young woman” comes the title of this performance-cry, where Cassandra’s battle is evoked by the body-voice of Stefania Tansini in the moments before her unfair killing as a slave/adulteress and ξένη/foreigner. A shamanic rite in which the stereotypical feminine fragility and her fiery spirit of vengeance merge, the funereal visions of the future, like animal prowess, the elegance of the gesture and the fluttering of the eyelashes – a nightingale hybridised by tropical feathers that refracts in an altered space – in dialogue with a mobile light (from beyond the world?) that chases and challenges her. Its language also oscillates, fluidly, between lucidity and animal mimicry that makes it shrill, obstinate and sweet. After the journey to the underworld, she returns to the surface transformed and nourished by the serpentine larvae of the earth, the light feathers gone, she emerges head down ready to continue, because once again, we were not meant to survive, as a fighter/Cassandra like Audre Lorde writes.

For those of us who live at the shoreline

standing upon the constant edges of decision

(Audre Lorde, A Litany for Survival)

Of the nightingale I envy the fate made its debut at the Merz Foundation in Turin on Nov. 4-5-6, 2022, as part of the Festival delle Colline Torinesi, which dedicated a Monograph to Motus, where it was possible to see several performances and a first-time video overview. 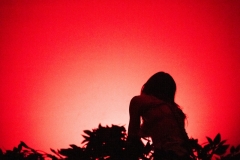