Kiss is new because it is now, but also a little while ago.
Kiss is serialized, screen-printed, a multiplied reproduction of a gesture that propagates virally: a kiss.
Kiss is a queer temporal dimension that does not lead to any paradise.
Kiss boycotts the narrative, reorganizing the scenic space according to an idea of comfort and simultaneity.
Kiss literally inhabits the scene.
Kiss is not meritocratic.
Kiss is a multi-organism that moves independently.
Kiss is a documentary or, if you want, a hairy object.
Kiss opens the doors and leaves them open so you can enter or exit.
Kiss can transmit bacteria.
In Kiss economies are a subject for the production of discourse.
Kiss does not translate but rather converts languages.

23 performers, an infinite number of kisses.
It’s 1964. You are watching Andy Warhol’s Kiss. A reel of silent intimacy. Everything that was prohibited in Hollywood at the time. Close up, passionate kissing between people of different race and same sex. No explanation need, just a pure celebration of love, desire and freedom.  Let’s come back to 2019. Can a kiss still be a manifesto? For the duration of the festival 21 performer will live, rehearse and kiss non-stop, day and night blurring between lips. Because what is a performance and what is reality? Who knows. Kiss is not a show, but a radical and fresh proposal for coexistence on and off stage. Each intimate meeting with the audience will offer a new experience, always fluid and resisting definition.

Actress and performer, Silvia approaches theatre by attending the school of Teatro Valdoca, and since 2005 she continuously collaborates with Motus. She interprets Marlene in Rumore rosa, dedicated to Fassbinder, the main character of X(ics) Racconti Crudeli della Giovinezza, and Antigone in the project Syrma Antigónes. In 2011 she works side by side with Judith Malina in The plot is the revolution. She is the protagonist of Nella tempesta, Caliban Cannibal, of the semi-opera King Arthur and in the acclaimed solo MDLSX for which she also collaborates on the dramaturgy. Her acting career has been coronated by numerous awards: Ubu award as best under-30 actress, MArteAward, Virginia Reiter award, best lead actress at Fringe Festival of Dublin and at MESS festival of Sarajevo.In 2011 she makes her debut in film with Davide Manuli’s movie La leggenda di Kaspar Hauser, followed by Roberta Torre’s Riccardo va all’inferno, Francesca Comencini’s Amori che non sanno stare al mondo, Roberto Andò’s Una storia senza nome and Jonathan Nossiter’s Last Words. In 2016 she started an independent career in performance and theatrical education, holding various workshops together with the researcher Ilenia Caleo, in different academic spaces – such as IUAV Venezia and Biennale College.
In 2019 she starts working on television with Romulus, a Sky production tv series directed by Matteo Rovere.

Performer, activist and independent researcher, since 2000 she has been collaborating with numerous companies and directors, among which Motus, Davide Iodice, Lisa Ferlazzo Natoli, Carmelo Rifici, Tim Stark, Yoshi Oida. With Silvia Calderoni, she started an open research atelier about the practices of performance and the relationship between theatre and urban space.
She graduated in Philosophy at Bologna University, and undertook a PhD with a project about the performative body, on the border between performance studies and political philosophy at La Sapienza in Rome. Her work deals with corporality, feminist epistemology, experimentations in performing arts, new institutions and new forms of cultural work, and the link between art and activism. She is a teacher at the Visual Arts laboratory of IUAV Venezia. 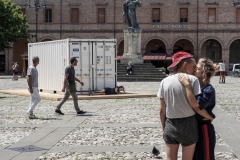 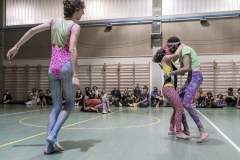 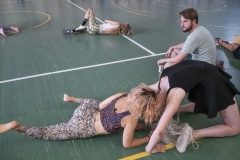 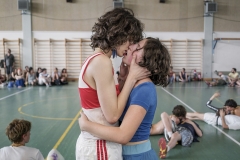 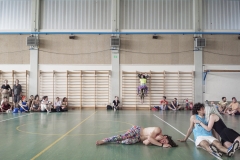 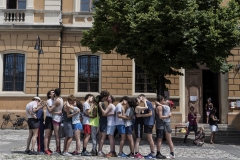