Emilio takes inspiration from the homonymous treaty by Jean-Jacques Rousseau – Emile or on education – a study on human nature written in 1762. By counterposing the concept of nature to that of culture, the philosopher describes the natural state as pre-social and utopistic, as the place of equality and self-sufficiency.
But how can a child be raised in a corrupt and corrupting society? With neither books nor precepts, far from the city and the splendor: nothing should be taught to Emilio, he must learn everything independently in the contact with nature.

The performance comes to life through the creation and destruction of tableaux vivants, playing with the distinction between organic and synthetic, dead and alive, organism and machine, body and object. The stage is a picture in a continuous mutation. Images form and crumble: a still life becomes a testing lab, an atelier, a clinic, a landscape. Seemingly distant elements meet in a possibly incoherent manner, bringing new meaning and aesthetic possibilities to life.
On stage Emilio transforms, himself and the surrounding. He experiments, alters, builds, inhabits, changes. He creates a multitude of fluid spaces, where natural and artificial interpenetrate, hybrid spaces, impure landscapes, transcending the limits, living one into the other. Superimpositions. The sign of what you used to be is always included in change.

The show is in Italian with English subtitles.

Alexia Sarantopoulou was born in Athens. She graduated in Sociology at Panteion Univeristy of Athens, she studied dance at Laban Center of London and obtained a master degree in Theory of Architecture at Athens Polytechnic school.
In 2007 she founded the collective ERRANDS together with others architects and visual artists, that was shown in San Paolo Architecture Biennial, Athens Art Biennial, Istanbul Design Biennial, Gardentopia – Matera capitale della cultura 2019. She started working as an actress in 2010 with Motus. She is part of the theatre company Nova Melancholia since 2014. She lives and workes as an actress between Athens and Italy.

Ondina Quadri was born in Fiesole (Italy). She joins the film industry in 2013 with the movie Amori e Metamorfosi from the franco-israeli director Yanira Yariv (Locarno Festival 2014). She is the main actress in Carlo Lavagna’s Arianna (Venice Film Festival 2015), for which she wins the Globo d’oro as best actress, and in the movie Il Nido (Locarno Festival 2016).
As a theatre performer she works with Motus, Nova Melancholia, Teatro Valdoca,  Kokoschka Revival. In 2017-18 she designs and directs the show TakenForGranted with Paola Stella Minni and Konstantinos Rizos. In the field of visual arts, she collaborates with Ludovica Carbotta, Andreco.
In 2018 she founds the band GiogioAndTheBabygang. 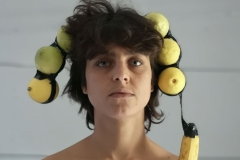