After “The Tempest”, a journey and a Temporary landing. A lightweight emergency tent is quickly installed in the empty zones of public and private spaces: from squares, to parks, to malls… all the way to the theatres.
A suspended and transitory non-place inhabited by two improbable characters: A+C.
They are together by chance and for necessity, landed in this shelter after tormented events of actual and existential wrecks, great gestures and frustrated claims. They try to have a dialogue without speaking the same language, they try to tell their stories, mixing Italian, French, Arabic…
a massacred English. They try to support each other without having the strength to actually do it all the way to the end.
“A” could be Ariel after The Tempest, aphasic and narcoleptic, in full confrontation with a freedom sought after in slogans, but fundamentally feared. Fragile like the chrysanthemum, “the flower of the dead”, that she has brought with her.
“C” could be Caliban after the island’s explosion, after the attack on Prospero. After the fireworks.
After the Tunisian “Revolution”. The journey. The landing in the Brand New World, the smell of trains on the hands, a backpack and a hard disk full of videos and shots for a documentary on the Tunisian and Egyptian uprisings, a work in progress…Furthermore a box full of books: not Prospero’s books, his books, underlined, learned by heart, year after year. Arab poets and works of French philosophers: of course, “Foucault, the bomb expert”, even though he writes in the hated and beloved language. Absorbed by imposition and badly digested. Cannibalized by the anxiety of knowledge. Always more. In order to find new words. New/ancient words…

The contact between A and C is like lightning. A new master? No, simply a brother.
The Shakespearian relationship is flipped.
That were the prerequisites for the fiction we would work on… but during our rehearsals all attempt to follow the script has been devoured by the Actual Time, by the power of the meeting we lived “in vitro”, among the thin linings of the tent. Osmotic filter to the world.

Each word, each gesture is filmed by two one shot cameras: from there is born a piece of filmed poetry reflecting their most intimate look. Silvia and Dalì have thrown themselves into the camera’s “occhio belva”, actually inhabiting the space, to truly get to know one another, to try breaking the limits and “transforming carbon dioxide into oxygen…” Violent Flowers.

They wear on their bodies pieces of crossed worlds, remains of desires, now piled up in a corner of their refuge.
A shelter, a shack? An elsewhere without solid foundations. With the risk of being destroyed by the first tempest… but in any case, what’s the problem? We move without actually inhabiting, we inhabit without questioning the stability.
To be a fracture of time and space.

Le Nomadisme comme une Forme de Résistance (Nomadism as a Form of Resistance) was the title of the “MucchioMisto Workshop” that Dalì organized with us in Tunis in 2013 (as a parallel action to the World Social Forum). But Dalì, of Berber origin, is not an actor. He holds a diploma from l’Ecole des Beaux Arts de Tunis and is currently a researcher in Philosophy…. he lives a permanent struggle with the bureaucracy of the “Lands” in order to be able to move freely, as it is right of every Human. And yet, this Sea which should unite us all, on the contrary divides us and continues spitting Dead people on the beaches of Sicily.

INSTANT COMMUNITY
In “Nella Tempesta”, the blankets used on stage – and brought by the audience – are later donated in every city hosting the performance to associations assisting migrants. Similarly, the emergency tent, beyond the intrinsic meanings it evokes as a symbol per se, becomes a material object to be used for other ends. It doesn’t die with the performance. It is an ephemeral place that can be quickly set up at Festivals, occupations and political initiatives, to develop in it all sorts of activities. It can become a space for meetings, readings, conferences… other artists can also invest it for little performances or video installations… it can host those who do not have a home or a workspace… or it can simply become a playground for children. A moving heterotopy.

This is our way of being in the artistic landscape… to roll out a carpet, to build a shelter… to always have a base that distances us, a step back that underlines our identity, without, however, zipping up the tent. To leave breath for sharing, for passage and, most of all, for hospitality.

Motus continues its journey within the 2011>2068 AnimalePolitico Project with another “encounter with extraordinary people” after The Plot is the Revolutionwith Judith Malina – who continues to believe with fervor in the “Beautiful Non-Violent Anarchist Revolution”. This time, with Dalì, who has been an active member of a “Revolution” – that he does not define as a “Revolution” – and who is profoundly disappointed, but who has not given up…
Like us. 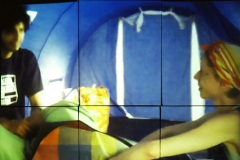 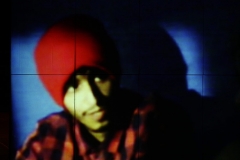 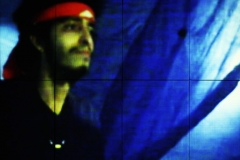 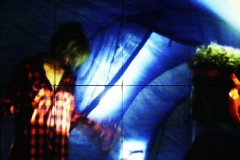 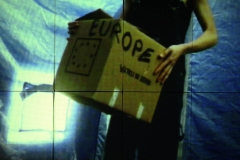 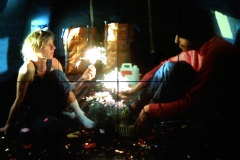 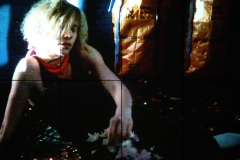 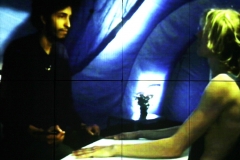 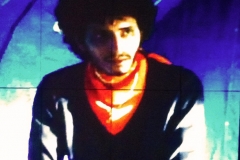