This last version has been preceded by a residency of about a month in Halle Neuestadt.

After the fall of the Berlin wall and of local industry this very peculiar city of former East Germany underwent depopulation, with the flight of workers suddenly left unemployed by closure of the big factories. Huge areas of council housing were abandoned, entire districts imploded and were transformed into disturbing phantom zones.

In Halle we breathed the air of post-war, post-end, post-fall of the wall that makes up the atmosphere of Neustadt, the satellite-ghost quarter, the new town, ideal, created for the workers of a utopian real socialism that collapsed and was sold in pieces, like the bits of the Berlin Wall you can still buy at the airport. The walls of this former East German city bear the signs of the end and of flight, the end of the dream-regime of “another possible world” standing against the standardising advent of the only winning-losing model: American monoculture which, like all monocultures, exhausts and dries up even the best land.

“I’m looking for myself, if you’re lost too call this number”… (ich suche mich) which had been translated in French (je me cherche) and in Dutch (ik zoekmezelf)… we got dozens of texts, which appear during the show…

We listened to the young generations, no longer generation x to which we belong but net generation (or whatever other definition the sociologists attempt), and we approached them, filming dozens of little bands playing in abandoned factories and cellars…

Here, in a dilapidated rehearsal room, we met Ines Quosdorf, a singer and music student. After 10 days of rehearsals she was facing a packed and enthusiastic house at the Theater der Welt…

For the rest our own theatre, mongrel and in perennial revolt against the “father-masters”, came into being in rehearsal rooms in the middle of nowhere, in Romagna, far from city centres and big theatres, independent and right from the start seen as a collective band rather than a hierarchical theatre company.

What and for whom do they play, these kids who try to speak English and know little about why their grandparents spoke Russian? Is the spirit the same as the French metal or hip-hop groups or the adolescent punks in Ravenna?

The same as what we find in Naples?

Most of the windows are empty and the few remaining young people roam around in gangs, like plunderers after who knows what disaster…

It’s this sense of ending, of post – and of tenacious resistance amid chaos that urges us on and is the soul of the last movement of Ics, short circuit of old and new, interior and exterior, empty and full, present and memory… youth and age.

This last movement brings onstage, for the concluding part of the show, an old lady who goes and sits on a bench transitorily occupied by kids… and here, in one of the places that cannot be subjected to the tyranny of time and production, the meeting between generations occurs.

So whenever the show is put on we look for an “extra” who speaks the local language and is willing to dialogue with our young actors.

Ics aims to remain open to cities, to welcome the polyphony of signs and sounds of the residual areas of each place where we are able to have residencies: X.03 however is the last movement because the show has found its format, its compositional dimension which, like all load bearing structures, retains opportunities for intervention on details, windows open on possible new cities… but it is in perfect trim. 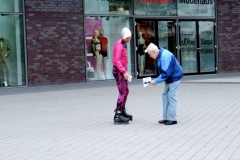 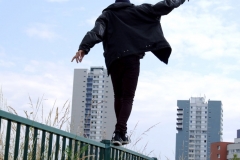 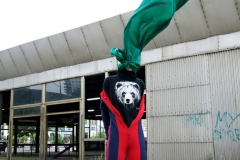 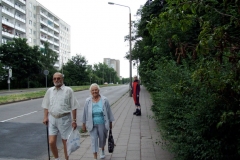 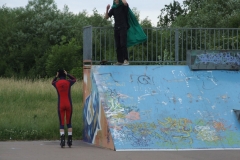 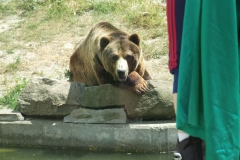 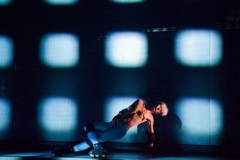 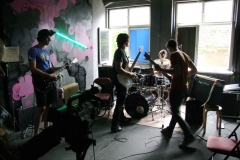 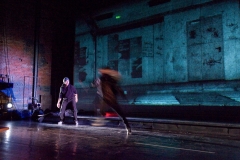 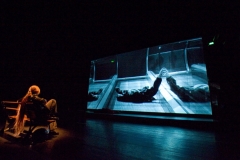