In November ’07 we then moved to the south of France, to Valence, no longer a linear, indistinct city but a historic old town centre with a separate North African banlieue. The prefabricated 1960’s architecture is functional in terms of segregation and perfect for keeping young North Africans far from the town centre. But beneath its patina of good organisation this dogged, wholly French decentralisation conceals explosive tensions and violence that are far from predictable. We entered timidly into this connective tissue thanks to ally-guide Sid-Hamed who always looked after us, curious about our inquiring into spaces without wanting to label them sociologically: we were always together, spending time in small band rehearsal rooms and on city benches, lashed by the wind to such an extent that the wind of these places also became part of the show …

The residency in Valence led to radical transformation of the project structure. Everything became more poetical and evocative, aimed at recovering that wearisome relationship with time spent waiting which young people without much chance of amusement have in a district where the main meeting places are benches. It’s only on Saturday afternoon that they go in groups to the shopping centres, and certainly not to put in an appearance of course but to show themselves or to demonstrate to themselves that they exist….

We worked in the banlieue of Fontbarlettes with the Maisonpour tous as our base, a youth centre frequented, as a result of the French administrations’ decentralisation policies, mainly by North Africans. We talked with people and wandered around the less dangerous areas where our film cameras aroused interest rather than the violent reactions aroused when they were mistaken for police cameras.

Amid these square and suffocating buildings Silvia distributed her leaflets, skating along dressed up as the super-hero “of the poor” and eliciting hilarity and derision.… Little by little Les italiennes became an attraction during the bored, monotonous days in the district… and we worked precisely on boredom and morbid inquisitiveness about everything that is different, strange and unexpected.

How to recreate certain states of suspension in the afternoon solitude of the city? Wandering, getting anxious or sitting in vacuous expectation on a bench, ceaselessly wishing that something new and marvellous will show up…. “I’m waiting, I’m afraid I’ve got nothing better to do…” says Malcolm at the beginning of James Purdy’s book (from which we wanted to make an impossible film). The ghost of Malcolm remains in the air, hovers over the impulsive shooting we’ve done in this autumnal city pierced by the wind, in the desolate and futuristic streets of Fontbarlettes and the Polygon, on the benches of an unreal public park.

We moved around swiftly with the video-cameras always running, eternally pursued by the curiosity of kids who’d at last found “something to do”: follow the troupe of Les italiennes who were not making a television programme – as everyone asked – but were collecting material for a future film. The material, the smiles, the shouts of those streets converged in a hybrid show that puts together the germs of a strident concert and a dirty, asynchronous dance, linked to the relationship with the asphalt of the streets, the perfume of the parks. And we’ll never forget the aspect of play… or better, as Cocteau writes in Les Enfants Terribles: to call it play is imprecise… one must know how to return to the reality of childhood, a full, heroic, mysterious reality that feeds on humble details and whose magic is brutally dissolved by adult’s questions.

In effect everything on stage happens under the eyes of an adult, an actor-father accomplice, a listener: the ally and curious MC in the tragic rites of passage to maturity… a father-friend that few of us were lucky enough to have in Italy where the family often suffocates…. Our theatre itself, bastard and in perennial revolt against “father-masters”, came into being in rehearsal rooms in Romagna, in the middle of nowhere, far from the centre and the great theatres; independent and envisaged right from the start as a collective, a band rather than a theatre company hierarchy. While the previous movement featured shopping centres and various reflections thereon, here it is the street that is centre stage, repeatedly evoked and reconstructed, a street that also becomes the scenario of death, an early suicide, a leap into the void, the reckless refusal of the young male actor to cross the threshold, to make the fateful passage into the adult world. Sergio’s death opens up a series of reflections on adolescent nihilism, as praised by the many punk and hardcore numbers that accompany the show… I’ll never grow up, not like you who’ve got a normal sadness… (Aldo Nove). Tomorrow Never Came is the undoubtedly significant name of a band from 14 to 17 year olds we worked with in Valence. But the show in no way wants to appear pessimistic… indeed Silvia’s character, right to the end, seeks to drag and incite everyone not to give up, to find themselves at last. 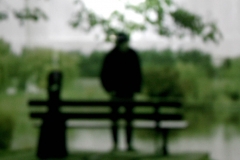 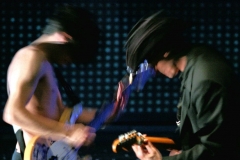 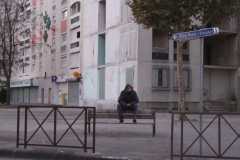 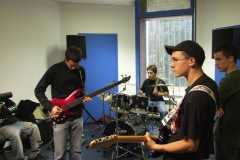 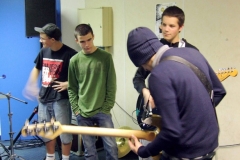 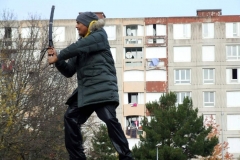 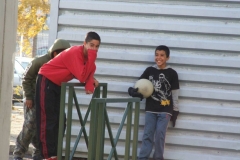 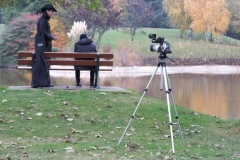 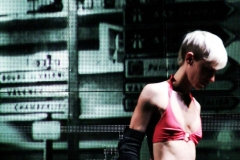 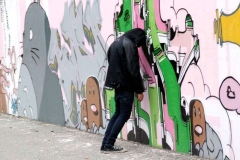