with the collaboration of La Comédie de Valence and A.M.A.T.

Motus thanks: for clothes the press office of Calvin Klein Milano
for the musical instruments: Woodstock in Santarcangelo

The first phase of the multifaceted itinerary is dedicated to our area, the Romagna lowlands, and resulted in a show that incorporates videos set in shopping malls, abandoned school holiday camps and band rehearsal rooms in the middle of nowhere, along the Adriatic state highway between Ravenna and Cattolica: the main thoroughfare of a phantom city, unique and linear, that also brings together many extreme experiences of theatre, music and art.… In this period we proceeded with constructing the set, giving dramaturgical structure to the piece and making the first phase of video shots, experimenting with non-invasive techniques and using hidden cameras in shopping centres and highly frequented places in order to avoid attracting useless attention.

We started filming by intertwining two stories: Silvia zipping around on rollerblades and meeting Sergio Policicchio for the first time (as actually happened) and long time Motus actor Dany Greggio who has left everything and everyone and lives in a car, occasionally meeting only his son Adriano, a kid with extraordinary acting abilities who is very curious about Silvia’s “street” performances. …

In the show itself, live action is intermingled and superimposed with video in a fragmentary narration that also includes snatches of dialogue and opinions recorded with hidden microphones by Silvia as she talked to kids on the streets and in meeting places. These experiments urged us on to secluded places where, at least then, people went for their first kisses, their first transgressions their first attempts at being there… being where? “…in a world I didn’t ask to be born into!” The problem isn’t the emptiness that young people have inside but the desert created by adults where they’re obliged to live from birth (…) as Paul Goodman wrote as early as the 60’s… and this is more or less what still emerges from conversations with kids… (…) How can I have faith in someone or something when everything I could believe in is systematically annulled’ How can I have faith in the law when all the institutions created by adults, the church, politics, the police, the universities… are corrupt… how can I dress soberly when I see an increasing number of adults acting like kids or achieving success by appearing younger… How can I have a plan when I’m living in a system that’s up to its ears in string-pulling… How can you believe in always being yourself when only a tiny minority really say and do what they think’ And why are mobile phones prohibited in schools but allowed in parliament? And why believe in the supremacy of truth when we get lies from the prime minister, MPs, journalists and even my own mother when she says she’s happy?… and how can you appreciate the beauty of this world when you’re continually seeing wars and environmental destruction? No…the problem isn’t our emptiness inside but the desert created by grown-ups… (from a text written for the show but never used).

The desert of adults is the human desert of which Pasolini also wrote, reflected in the new urban deserts of today, spaces of wildcat destruction and reconstruction, no-man’s-lands where shimmering Shopping Malls suddenly rise up where you go to pass the time rather than to buy, places where kids hang out to meet and be seen, to try and be there, once more among goods as goods.

– What do you see? An endless kingdom without a centre: the soft version of a police state.

– Hasn’t arrived yet. But he’ll show up. He’ll come out of some shopping mall. Messiahs always come from the desert.

(From a dialogue of the film on the first movement of the Ics project, taken from Ballard’s Kingdom Come).

The set simulates a long pavement in the lee of a perforated sheet metal wall on which the video is projected: multipurpose and scarcely invasive it can also be installed in non-theatre spaces, precisely because we want this project to be enjoyed by the many, and we’re aiming above all at young people who don’t normally go to the theatre.

“(…) the place chosen as symbol for looking “outside” is a bench. A tribute to the beloved Malcolm of James Purdy’s book, the bench becomes a commonplace, everyday frontier zone, a space for fleeting, casual encounters (…) the eye that roves the suburbs is especially interested in grasping an Italian situation which seems to be marked by building speculation,road traffic, a military base that breaks up the cityscape and by a real but invisible and distant war. The eye of Motus – in Malcolm’s wake – is more interested in insinuating itself into the pauses, the vacuums, the plaintive relationships established among the characters, in inquiring into the influence and pressure of the outside world on small everyday episodes, rather than reflecting on the more striking and destructive results.” 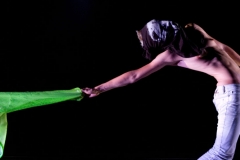 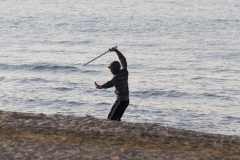 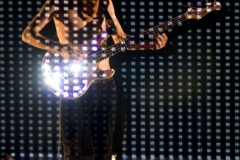 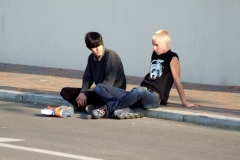 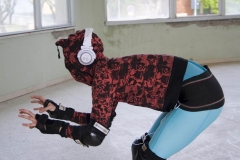 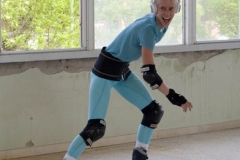 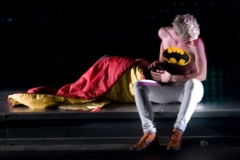 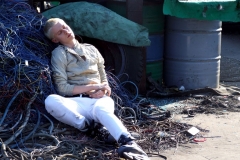 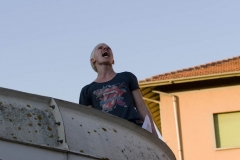 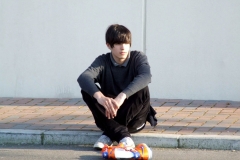 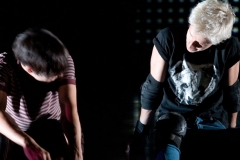