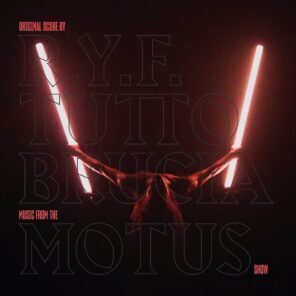 Tutto Brucia (Music from the Motus Show) is the original soundtrack composed by Francesca Morello, aka R.Y.F., for the Motus‘ homonymous theatrical show, which sees R.Y.F. as protagonist on stage – on songs and live music – with Silvia Calderoni and Stefania Tansini.

On 20 September 2022, the album was presented live in the Triennale Garden. The vinyl and digital release took place on 7 October via Bronson Recordings.

The music of Tutto Brucia, greeted with important response from audience and critics, was composed by Morello at the same time as the songs included on her solo album Everything Burns (presskit), released in 2021, always by Bronson Recordings, and named after the English translation of the play by Motus, Tutto Brucia (“Everything Burns”). Everything Burns could be defined as an electro-punk explosion steeped in queer, feminist subversion, able to conquer even the Skunk Anansie who chose R.Y.F. to open their summer gigs in Italy. “Sometimes I would really like to burn a lot of things”, Morello says, “bad things that are in this world, this society. Patriarchy, homophobia, transphobia, fatphobia, racism — burn all discriminations. I believe all discriminations start with the patriarchy, and I would like to burn them all down for the people to be happier — and freer”. The album contained also the dark dance single Cassandra, an epic hymn of sisterhood accompanied by a video directed by Motus with the participation of Calderoni and Tansini, and the ballad Pocket Full Of Ashes, both originally written for Tutto Brucia. “I think that women need to raise their heads, as Cassandra says in the tragedy, and be proud of themselves. It’s time to take the powers back”.