I Rebel Therefore We are_
(Antigone)contest #0:

Motus, as the only Italian company, was called on to compare itself with several French and Belgian groups regarding theatre practices and to experiment together with new forms of writing for the stage, setting out from the use of technologies and new media in the creative and production process. The Chartreuse director, Franc Buchard, was to stimulate the artists to tackle continual flows of news and transform the information into a show through refined artistic elaboration…

For Motus the project would be an occasion to process video and audio material from all over the world concerning various forms of rebellion in the contemporary situation, from student to ethnic-political uprisings… a research itinerary which would then be inserted into the broader process of in-depth study on Antigone. From this residency a first event emerged, a 45 minutes performance by Silvia Calderoni and Benno Steinegger with a technical/visual contribution from Francesco Borghesi and the collaboration at theoretical level of Rodolfo Sacchettini who is involved in the Sonde as critical-dramaturgical consultant. 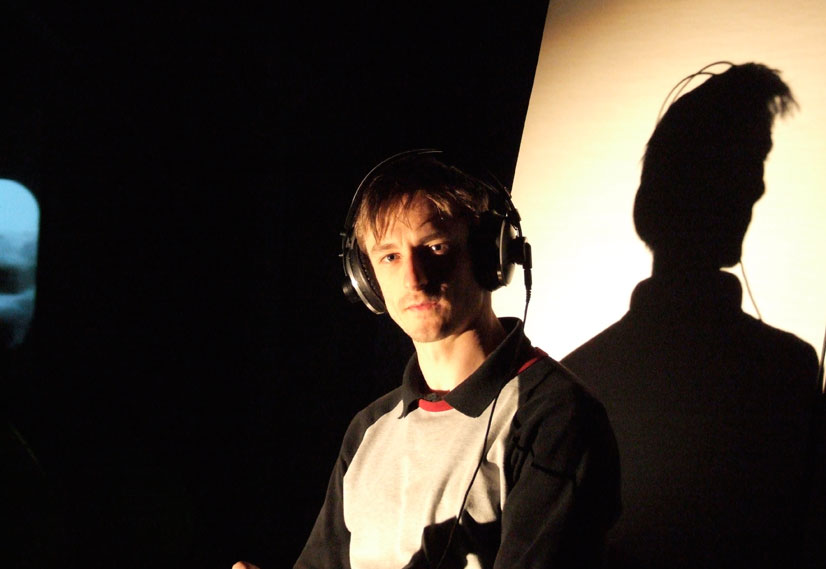 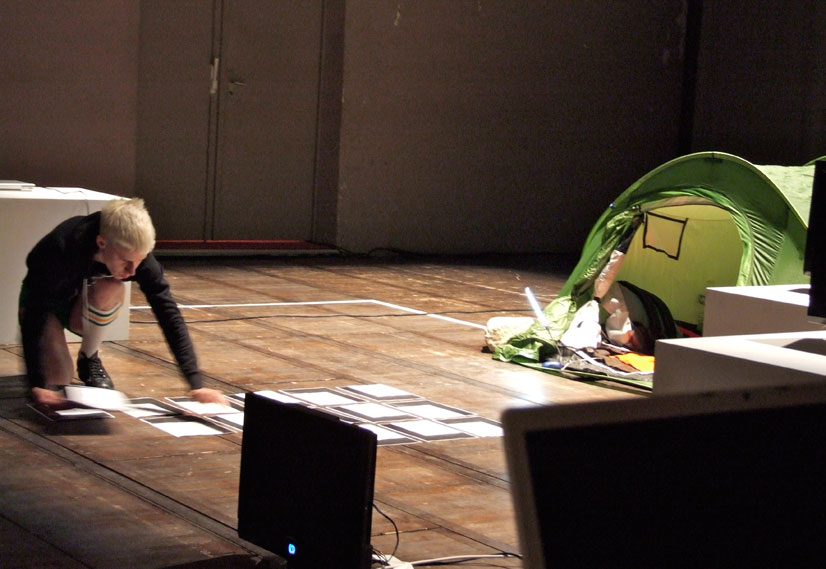 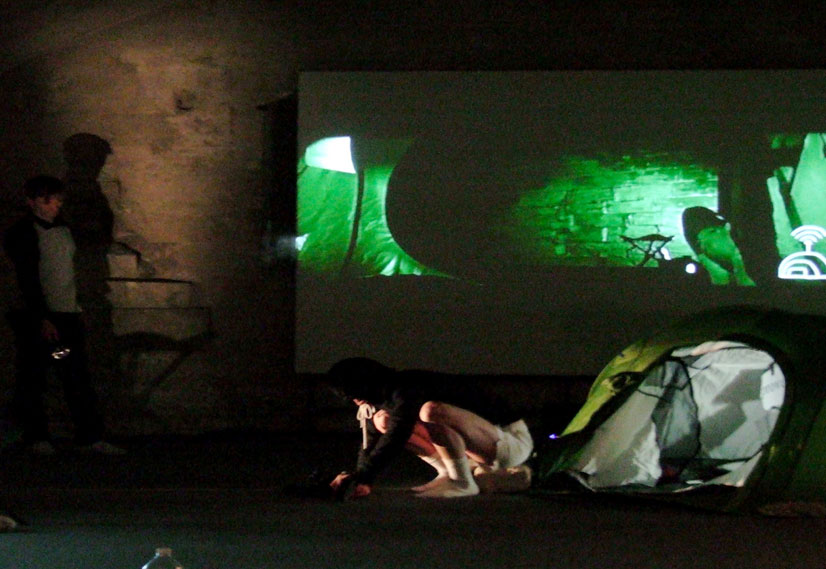 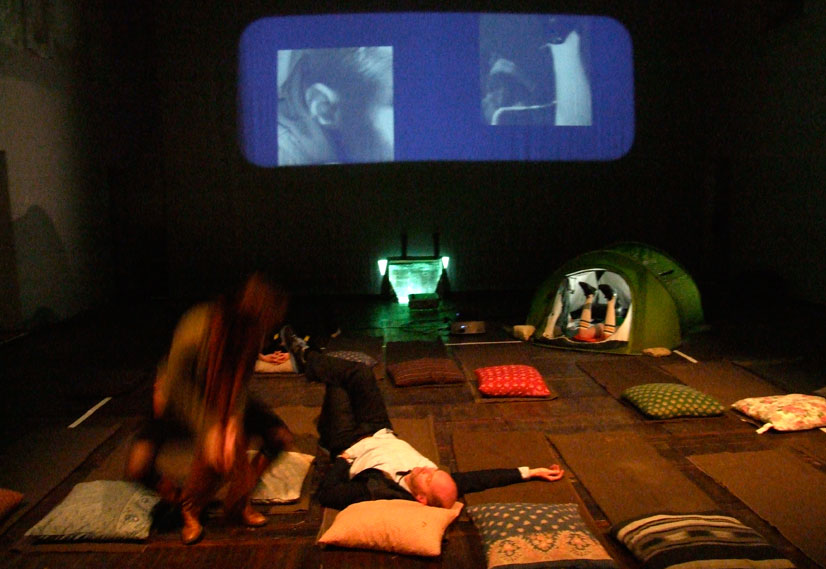 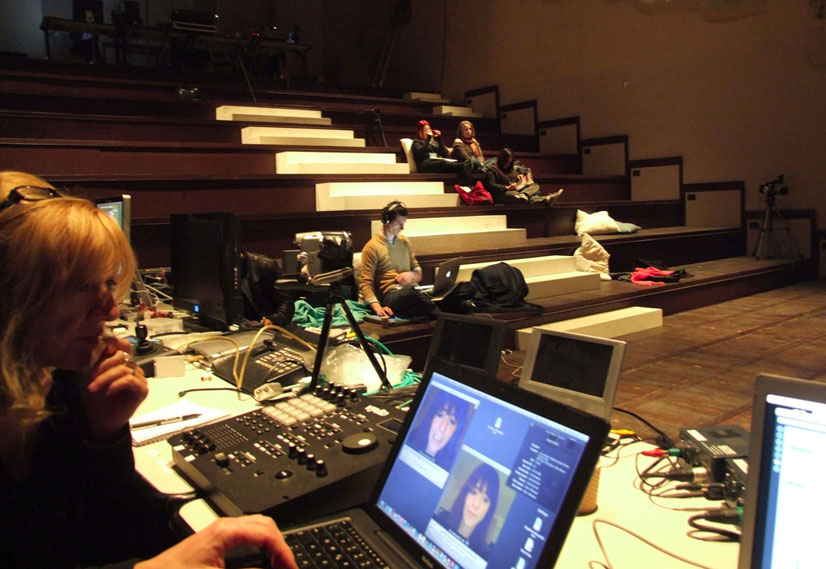 A preliminary study of the figure of Antigone took place during a workshop held at the Festival Magna Grecia Teatro, in the amphitheatre of the Cirella Ruins (Calabria) in August 2008.

The work was focused on the relationship between Antigone, her father Oedipus and Creon, recounted by the voice-glance of her sister Ismene…(drawing inspiration from Grete Weil’s novel “My Sister Antigone”), following Brecht’s version in which the conflict with Creon takes on a radically political aspect.

New aspiring actors living in Calabria participated in the creation of the event.

How do I imagine her?
One day I think I know, the next I don’t. First she’s a part of me and then my complete opposite. How do I imagine her?
A dream through time as I would like to be, as I am not, the daughter of an adolescent king, then vagabond, then intransigent
combatant in the resistance, who puts her life on the line and loses it, disciple, lover of Dionysus, life means hate for her and death means love.

“She the Decisive One who never stoops to compromises.
She is always present, still within me, everything is clear between us, I know for certain, I have no doubts, she wears a green dress with narrow stripes, she knows I like her, it’s great to be with her, as it is with all people who love life… Yes, she loves life in spite of her yearning for death.
If this were not true I wouldn’t believe in her desire to die, to die in order to live more.
Her gesture is a great mise-en-scene designed in the finest detail.”
(from “My Sister, My Antigone”, Grete Weil) 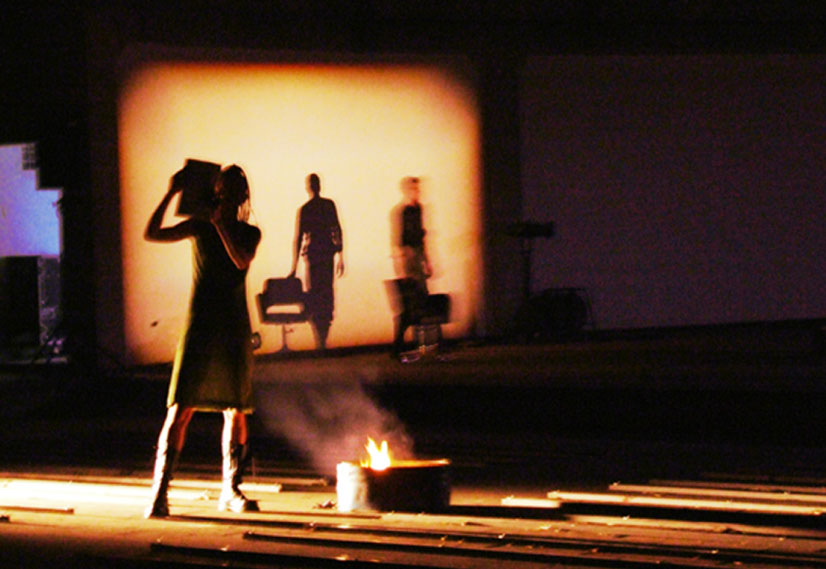 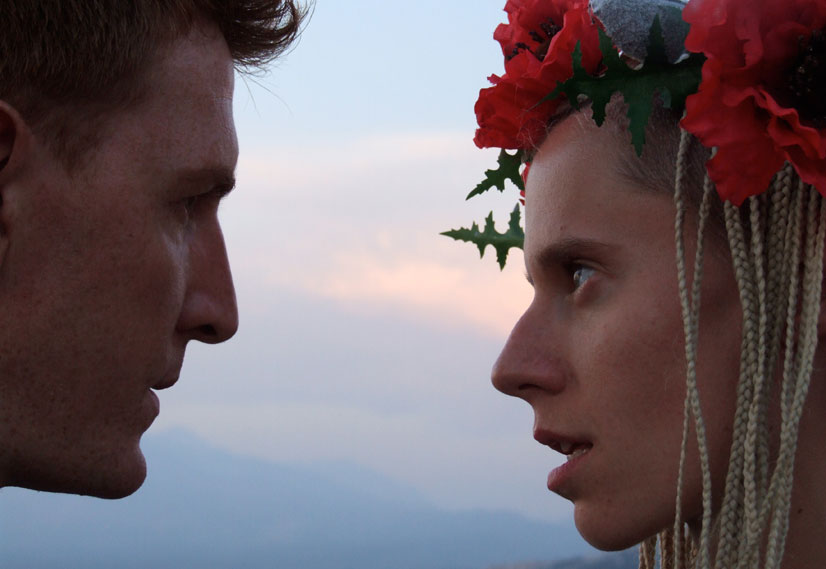 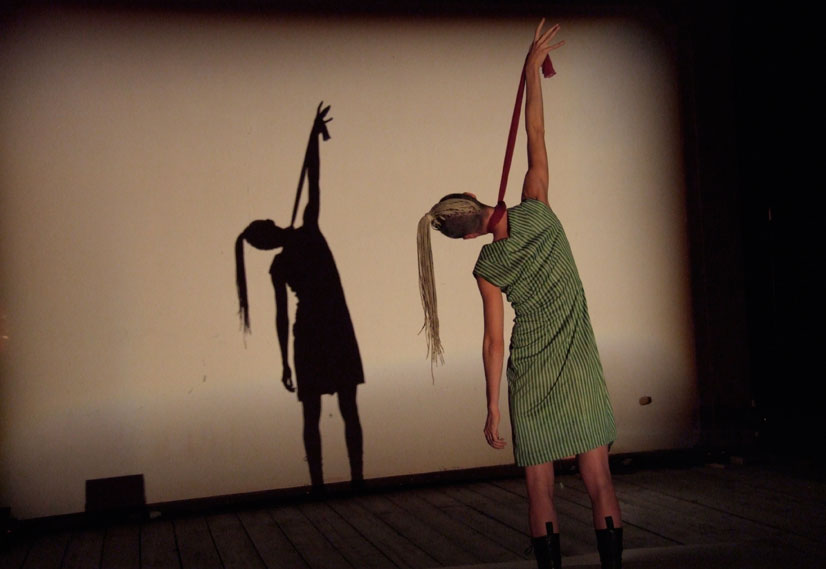 To take part in the workshop held at L’Arboreto Teatro Dimora in Mondaino from 7 to 21 December ’08, the aspiring participants were asked to answer the question:

“How do you imagine Antigone today?”

There were about 200 applications from which 30 young participants were selected: 3 writers, a musician, a set designer and 15 actors of various nationalities.

Here are some notes that university researcher Flavia Cardone made while taking part as a listener:

From Antigone’s extended rebellion to each individual’s personal revolutions: the shift of sense that is pursued is condensed into this research itinerary in the hypothesis, with the pretext of the archetypal heroine against, of working on the meaning of the idea of rebellion for young generations in regard to codes, directions and languages, setting out from personal lived experience. In the wake of a continuum that leads from Ics to here, once more Silvia Calderoni is the instigator of mutations – imposing and minimal, individual and collective – echo, excerpt, residue of this Antigone deliberately set in brackets.

How to try and come to terms with all this? Motus follow the road of trial and error, inspired by doubt and many questions, a complicated inheritance from Antigone’s tragic solitude, leaving many thresholds open in this moment of extended and horizontal thought between the arts and the experiences of those who represent them. Certain that the response is always and only in the attempt and that desire is criminal, unhinging certainties and always violent in representing an absence.

From an open theme put forward, an infinity of responses arrive, fragmented avenues towards a dramaturgy of unsatisfied desires and cutting uncertainties…

Such a quantity of energy turns out to be the absolute sign of latent expectation: with their bodies and voices the young performers generate answers that they apparently had always been on the point of wanting to give. Little, enormous questions which, however, nobody had yet asked.

Who are you, what do you believe in, what do you desire, what do you love? Has anybody ever asked you? A wholly incredible thing may arise from such a broad yet minimal suggestion: impossible not to reflect on the blocked communication and listening mechanism between generations.

A place of reflection on the family, on contrast, on love, on desire: Antigone intermingles all of this but above all it is revealed to be a privileged occasion for reasoning about the bonds of power. Antigone’s sin in fact consists of having challenged power. Hers is an impossible attempt at an order other than Creon’s, a right that stands not on a consent to be organised but a dissent to be suppressed: where the proposal of another world of values is a lost battle, Antigone can only do her best to keep alive the possibility of dissent.

And wholly voluntarily, characterised by an oppositional dimension that is individual before being political, the refusal to obey an unjust order, a declaration of war on war. To bury Polynices is necessary, and if this necessity implies lawbreaking then the law must be broken since it is necessarily unjust.

Whereas her only law is love, not a simple sentiment but a standard of life. Power implies a relationship. Contract, pact, compliance, refusal, action, reaction, trust, orders, masochism: numerous key words step forward of their own accord. 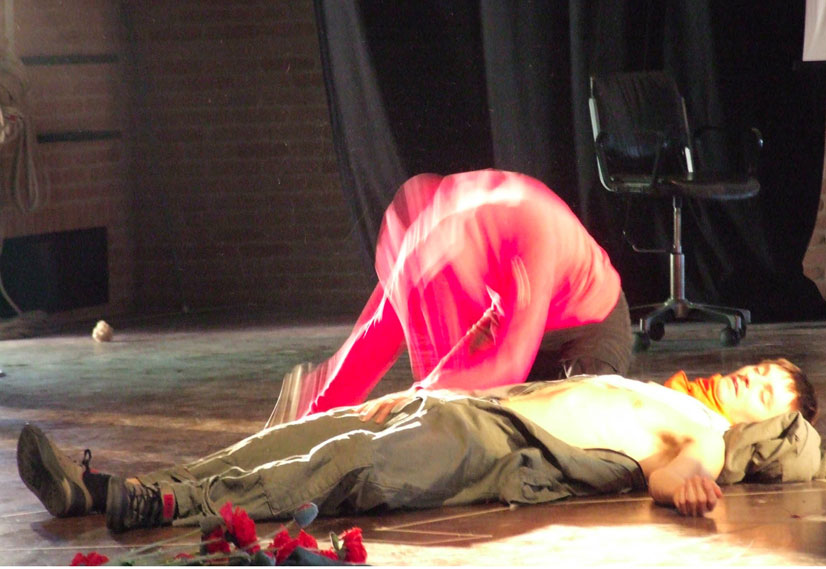 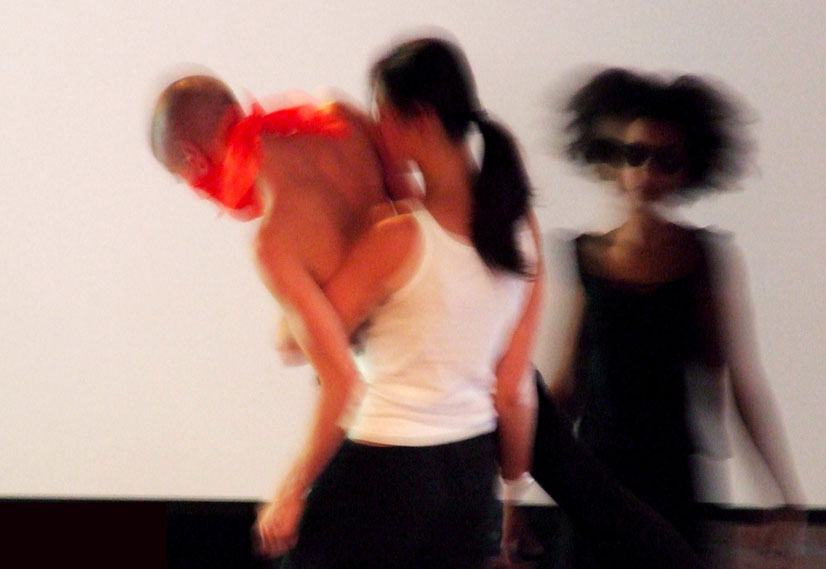 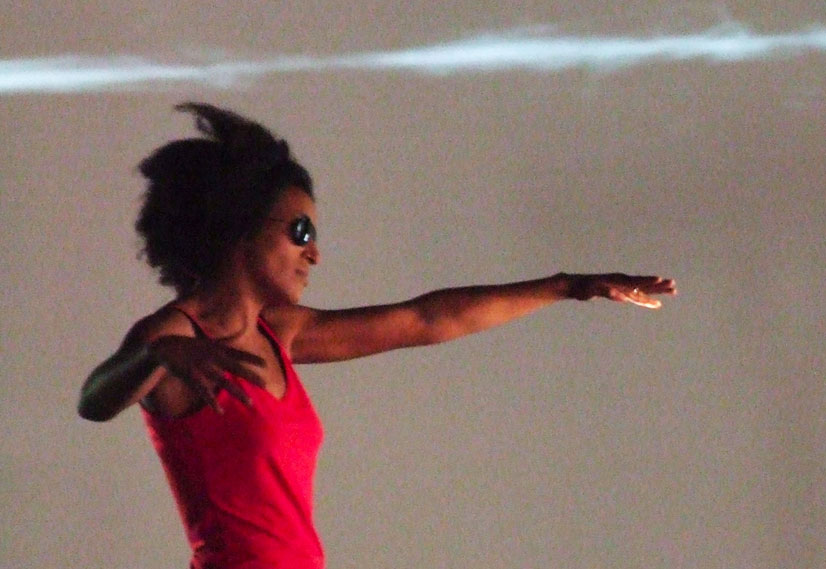 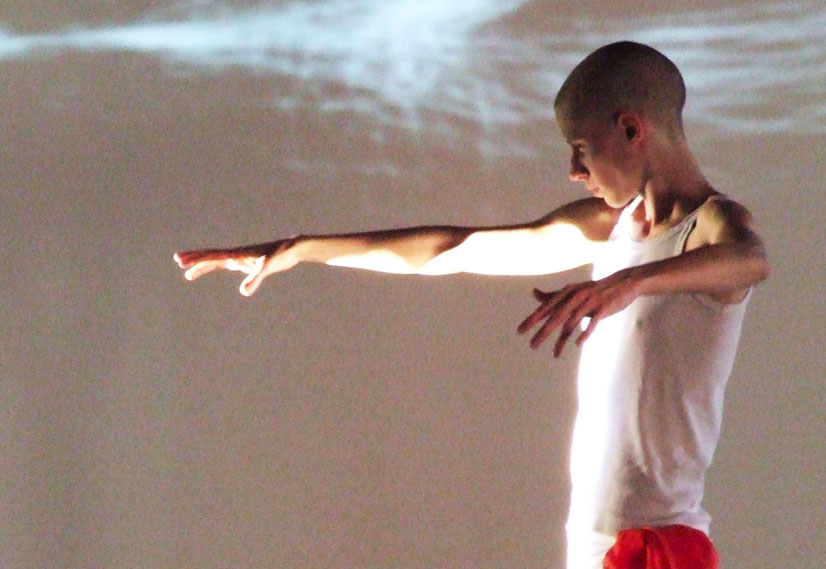