“How to transform indignation into action?” This simple and enormous question sent us on the tracks of Antigone: a backward glance, listening to her radiant stubbornness, in order to reflect on the present. We worked at recomposing the tragic events into an original play, using a script impregnated with the biographies and personal experiences of the actors involved. An itinerary begun in 2008 from which three contests emerged, performances intended as confrontations/dialogues between Antigone-Silvia Calderoni and three different actors: Benno Steinegger-Polynices, Vladimir Aleksic-Creon and Gabriella Rusticali-Tiresias, entitled Let The Sunshine In, Too Late! and Iovadovia.

Alexis stands at the end of this journey though it presupposes the beginning: in August 2010 we went to Greece to retrace direct testimony of the killing, by a policeman, of fifteen year old Alexandros-Andreas Grigoropoulos (Alexis) which happened during our first study workshop for Antigone: a “Polynices” with a Sex Pistols T-shirt… This event led us to shift the Antigone-project in an increasingly declared manner towards the theme of contemporary revolt.

Alexis was killed on 6th December, with a bullet to the chest fired by 37 year old policeman Epaminondas Korkoneas, one Saturday night like many others in the Exarchia quarter of central Athens near the Polytechnic, well known for indefatigable resistance to the Colonels. The episode, bloody and violent as it was, seems almost epiphenomenic. It was definitely not a fortuitous incident: it was the fuse that set off a chain explosion and it would be easy, if questionable, to link it up with the violent revolts that have struck European metropolises over the last few years… Alexis’ death not only urged many adolescents like himself to take to the streets, but not only: the protests were joined by all classes of Greek society, triggering a people’s insurrection without precedent.

But how come protests in Greece are so inflamed, so well organised and protracted… whereas in Italy everything boils up and then cools off in total fragmentation and lack of communication between movements?

We set out from the Thebes of today towards Athens… in the light of the geography altered and overturned by the crisis: an immersion in the tragic that is gripping a country so close to Italy in its vicissitudes and tensions. We went to the place of this death more than a year after the facts, when the event had been completely forgotten by the grind-all press, when nobody talked any more about what happened during those days (a real uprising), because the whole “Syrma Antigònes” project reflects on the Too late, on the fact of getting there too late, after the irreparable: but is it really too late? What action is possible? These are questions we ask ourselves as artists, prior to every show, being unable to go on doing theatre while pretending that “outside” doesn’t exist because we’re too absorbed in our exhaustive formal research. Doing theatre in connexion with the oscillations of the real means being catapulted into the speed of the happening and setting yourself to listen. The outside escapes time and theatre space like a wild animal and it must be pursued in order to avoid the risk of losing the way. The experience of being lost is good: it reactivates perception and blood flow, “unbalances the fixed image of the world”.

The stage becomes the place of a choral presence, emotionally moving, which acts on a polyphonic and stratified text of a hybrid and lightning-swift nature: dialogues, interviews, solitary reflections, attempts at translation from Greek into English and Italian, audio and video fragments from the web, descriptions of atmospheres and landscapes, political statements and testimonies. Pieces of a world gone to pieces… We quote a fragment from Ics cruel tales of youth because Alexis is part of this itinerary, a Greek tragedy of today. The play is shaped on the extraordinariness of the present time through open questions, engine of an ongoing and breathless research, of an indispensable relationship between art and metropolis as fulcrum of political and social changes. The rapidity of these transformations has not ceased to butt against our body of artists, setting us in continuous discussion about the work itself. Avoiding simplifications, we’ve tried to open a space without time where the questions resound like an obsessive echo, where indignation is revealed also outside the circumstances and inside the complexity of contemporary history, where action reacts to indifference. It is at once a documentary and poetic research which we hope will grasp the multiple faces of this Greece and those of the great many territories that are now reacting to the infinite present. We now find ourselves doing a play which is so directly driven by the real that it takes on different connotations from day to day. Just a few shows back a lot of people asked if we’d introduced texts in relation to the current student protests… and we hadn’t. All the reflections actually come from the conversations-interviews in Greece last year, after the explosion of the revolt and crisis… In a certain sense we began three years ago a dramaturgical itinerary which slowly and progressively began to dismantle all our usual stagecraft and threw us towards the chasm of empty space which, like a web page, has the potential for ongoing change, it can be “updated in real time”. And this throwing ourselves headlong into reality echoes Pasolini’s “living in things” which we used as our book title, well aware that it is not an easy choice and cannot be employed merely to give us “a clear conscience”… It is and must be a commitment, a form of civic responsibility and, for us, also a reply to the letter sent to the press by Alexis’s friends.

Where are the parents? Where are the artists? Why don’t they step outside?
We aren’t terrorists, we aren’t the usual hooded, faceless ones…
We’re your kids.
These known-unknown people.
Help us. 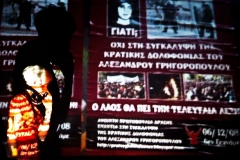 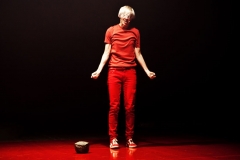 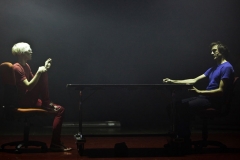 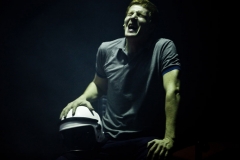 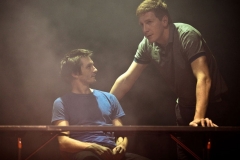 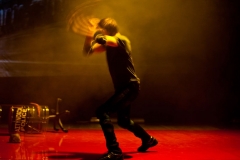 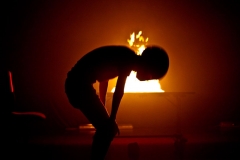 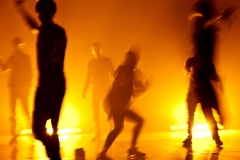 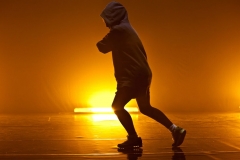 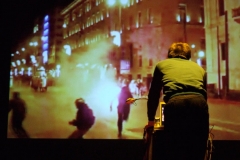 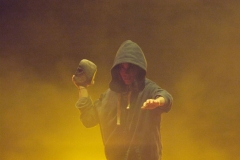 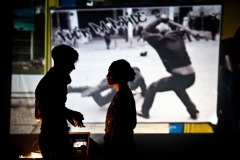