A Motus and Venice Biennial Production

Close together, side by side. Two places, two expressive forms put into contact, compared: the two faces of motus theatre.

To date we have always and only sought to graft onto the stage composition the typical procedures of cinema montage, to construct shows in which the linearity of theatrical time is obsessively fractured and derailed, shifted to other sides, borderline territories between expressive forms.

Twin Rooms, two rooms: the solitary “Vacancy Room”, perfect and super-equipped hotel room, aseptic and disturbing, pink, bright ……. “A (non) place at once highly intimate and anonymous, island of solitude, boudoir for brief encounters, far from the everyday, for instants of momentary affinity and for all kinds of transgression of which, however, all traces are erased, washed away, and everything leads back to the (dis)comforting anonymity of the room. A sort of optical box of six metres and four metres deep, a place of cruel exposure for the actors, the absolute place for the glance, aimed at exasperating even more the spectator’s voyeuristic bent.”[1] Only a bedroom and a bathroom to host fragments of wandering or at any rate travelling existences, “with that smell that trains leave on your hands”…. Attempts at dialogue, amorous talk like “news read by a presenter”, thoughts like literary quotations, in the first person, taken from the pages of Don DeLillo and Breat Easton Ellis, the two American authors around whose work the whole atmosphere of the room is modelled. Room as set, where cinema and literature converge, collide and fuse.

Then there is a screen of the same size (6m x 3m high) which reproduces, with the lines of a frame, the room’s missing wall, sectioned by a partition between bathroom and bedroom. The “digital room” is recreated by two back projections side by side (one for the bathroom and one for the bedroom).

It can be set next to the real room, thus producing the final effect of a kind of great cinemascope twelve metres long, or it can be superimposed to create the effect of a “two storey hotel” of 6 x 6 metres high.

We are seeking a new form of stage narration: the two languages, theatre and video, are not superimposed in accordance with mixing techniques but set side by side, interfaced, to tell the same stories in parallel.

A double film then, or a show divided into two?…..Or a film and a play running parallel?….

We don’t pose ourselves the problem of definition but delegate it to the spectator’s perceptual modes, just as we always leave the public eye free to recompose the fragments, grasp the time leaps and suspensions which have so much to do with our experience and which acquire unity only if linked up to the “non-narrative” of our existence itself. “One lives on brusque, incoherent jumps, in an absolute confusion between the most encumbering things and imperceptible glances stolen in the crowd which scratch us inside. No logic of plans and development. All I know is that I do not know. Motus no longer plays, it observes and records as in a verbal aridity. Filling the empty spaces, stitching up the weave is left to the observer. The fragmentary work becomes poetry at the moment it obliges completion of its mutilated curves” (Gòmez Dàvila) [2]

Twin Rooms is for motus an unprecedented expressive point of arrival with regard to the possible congruencies / non- congruencies between video and theatre which have been investigated for years on the international artistic scene. A show on current time, on the existential vacuum with which and on which our here and now being is based, beyond the abused categories of verisimilitude of vulgar television reality shows… Stories, moments of life written by young playwrights and contemporary narrators, in dry and natural language, imbued with harsh irony and cynical minimalism.

Anaesthetised stories, disorienting, absolutely not anecdotal, set in the time/non-time of a hotel room, in a sort of duplicated present continuous, copied by the presence of the screen through which the same scenes, the same dialogues are filtered by the glance of the m.d.p. that broadens and reveals hidden or understood meanings, “without reserve for squalor or lowness, without reserve for moments of infinitesimal poetry”. The Savage Eye of the telecamera penetrates objects and actors, revealing details and subtleties of expression, or it cuts, puts together, stitches up temporal leaps showing a flashback or behind-the scene of what is still happening in the immutable hotel room. Screen as background then, as a further dramaturgical and narrative level; screen as decoding device of what is taking place on stage, which penetrates precisely where the theatre, with its magic, cannot reach: detail.

Twin Rooms: stage machinery based on a complex digital technological system which operates with lightness and discretion amid the meanderings of the play, without weighing it down but rather acting with that athleticism we have always employed in order to slide through the genres and rigidities of theatrical forms.

“Time seems to pass, the world happens, the moments go by.” 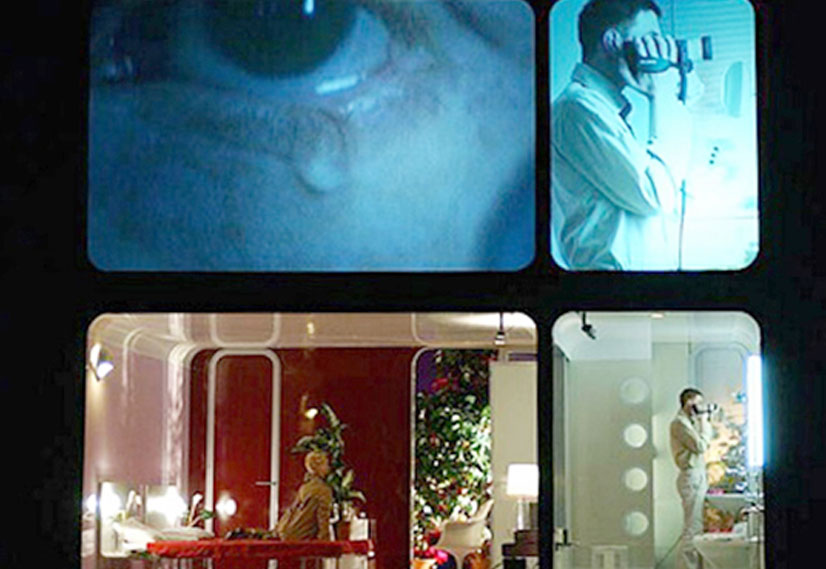 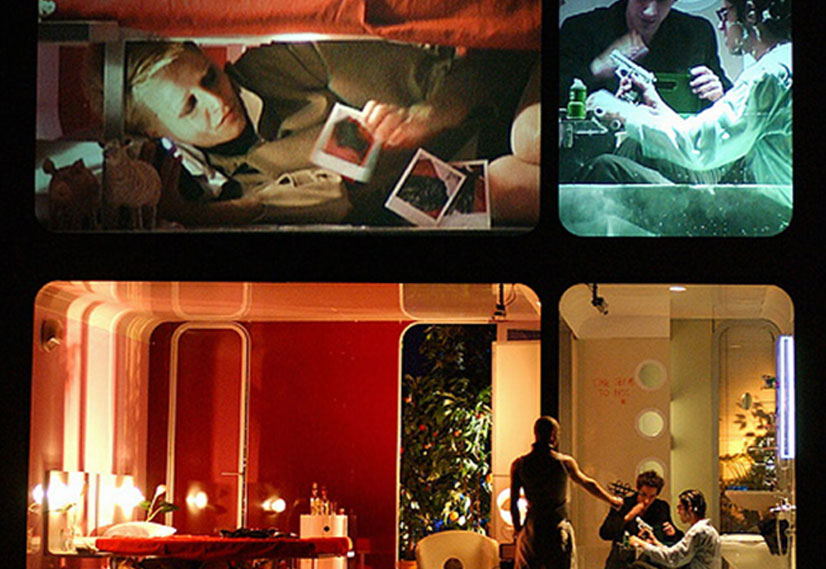 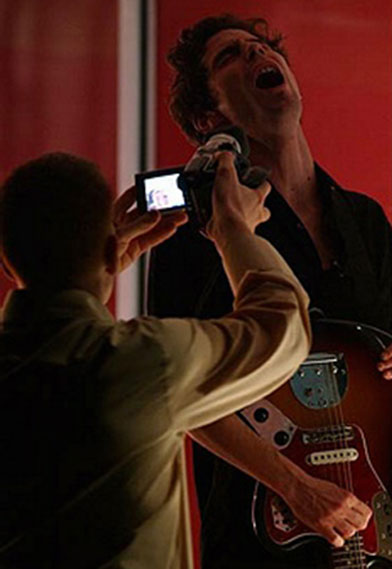 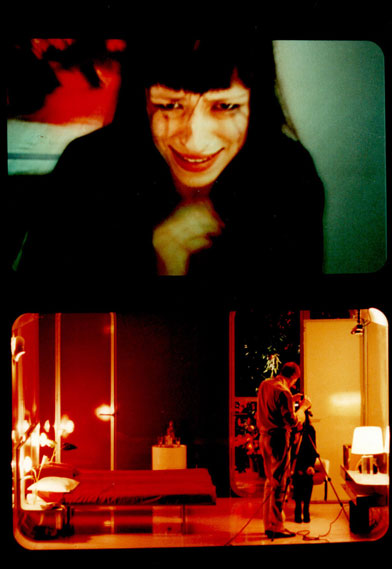 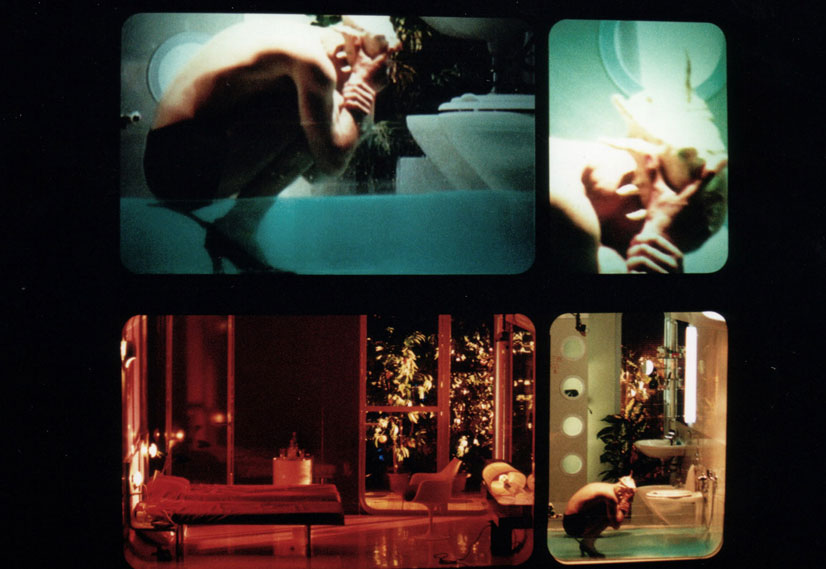 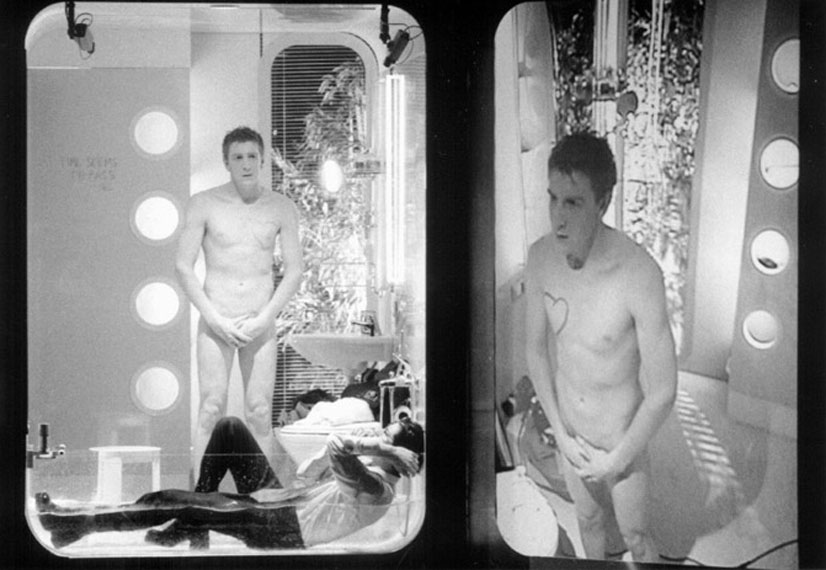 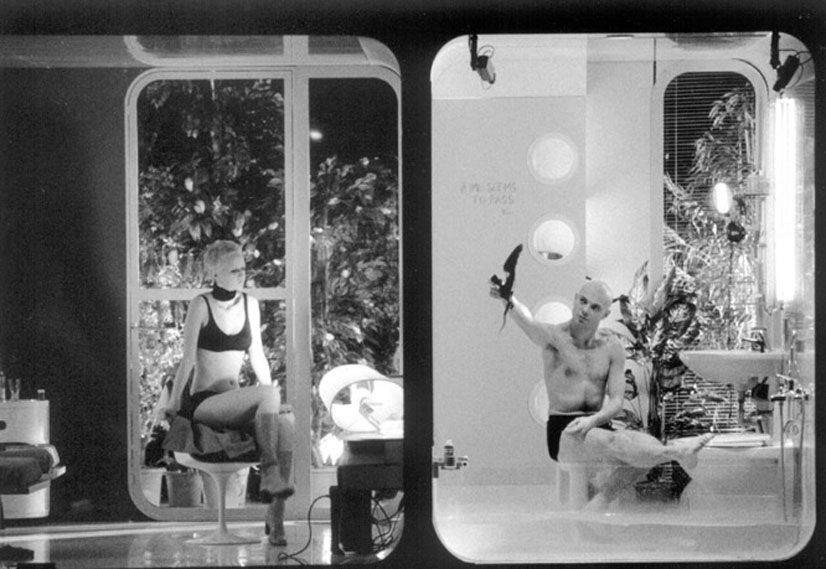 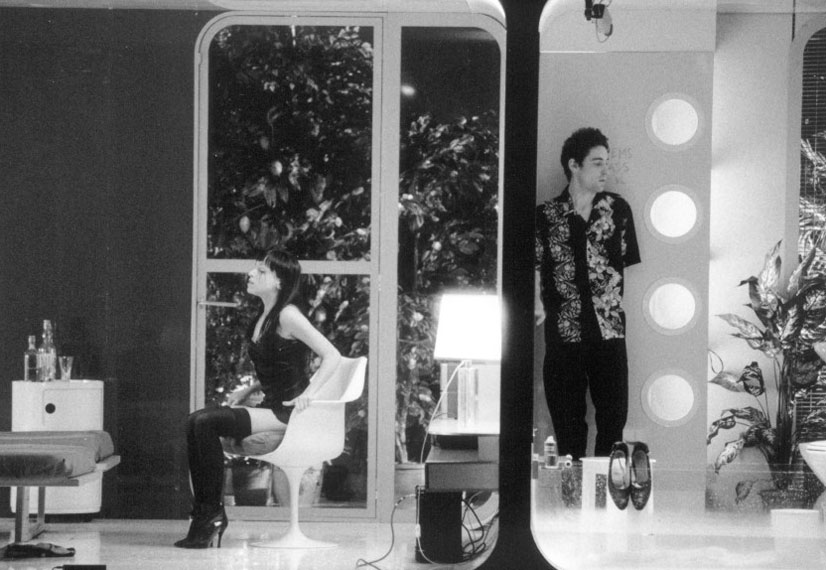 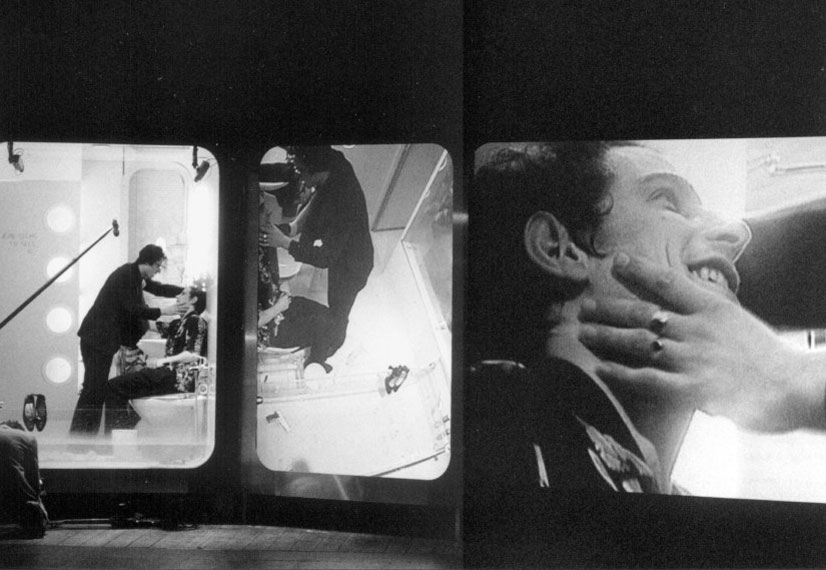 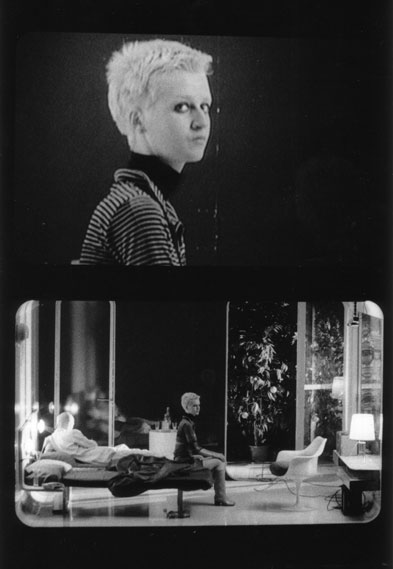 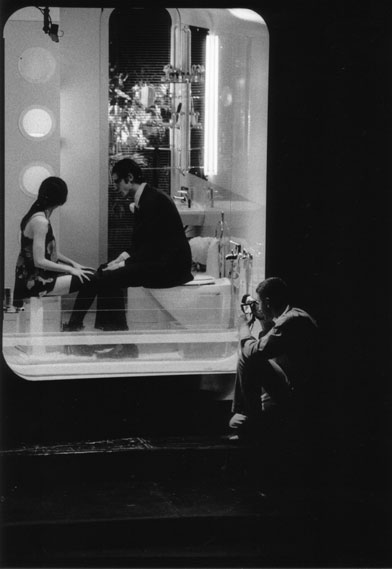 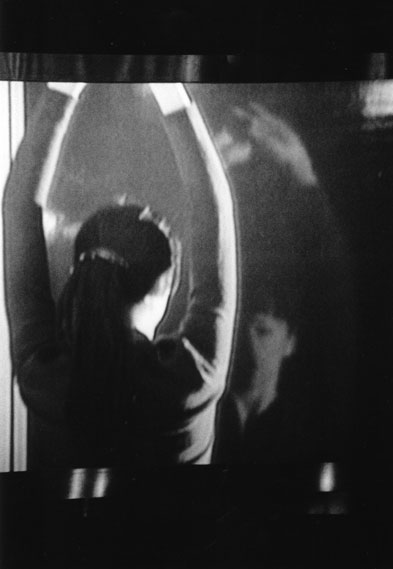 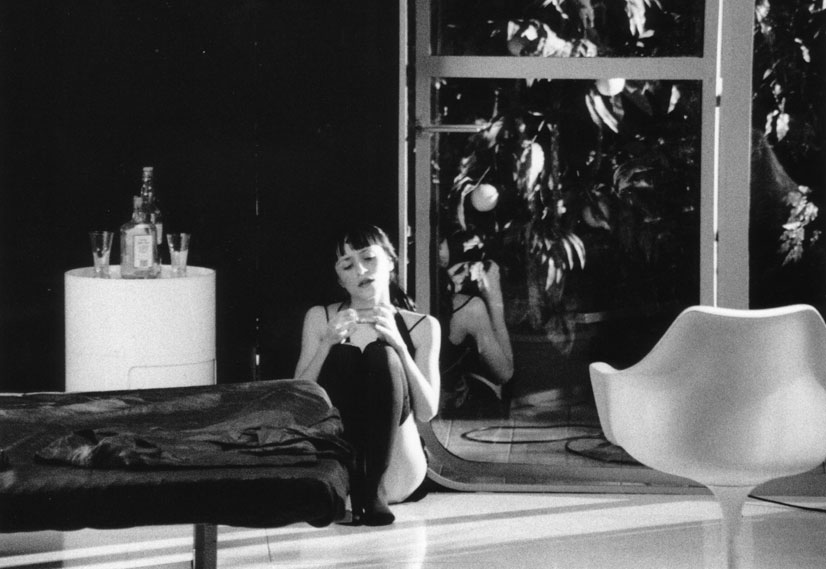 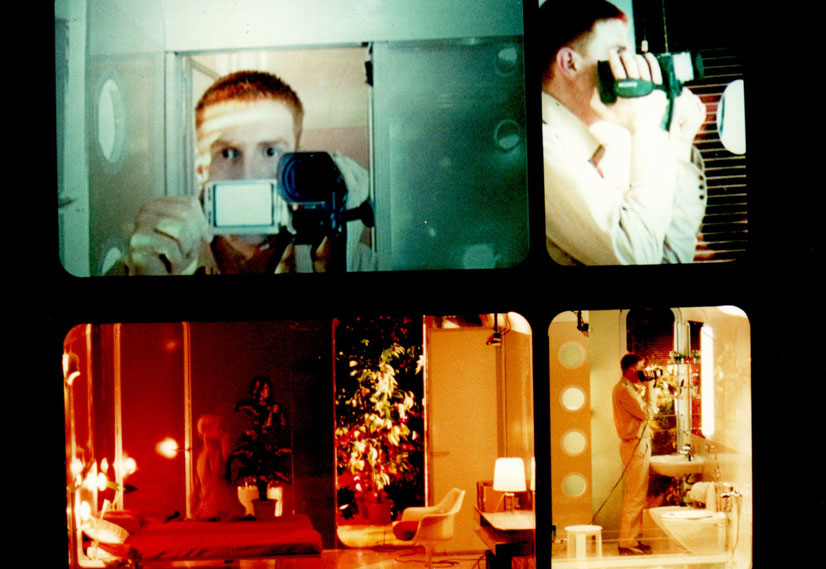