The idea of a new start, even without a precise destination, opposed to the requests of “brilliant” performance and hyper-efficiency imposed to the new generations, seems to us like a new way to get back on the table some old-fashioned attitudes, like wasting time and getting on the way, wandering around marginal and unexplored areas precisely to start again
Rip it up and start again is a show-concert-karaoke-manifesto which searches in the recent past to have a different gaze on today and maybe, instead of spitting on it, tries to create and unpredictable different scene-movement, capable of causing astonishment and encourage to turn up the volume of dissent.

We choose to give a musical mark to this new show-collective adventure, because music often works as an effective predicting agent of greater changes, even with respect to the fateful question which grips new generations at the end of a study course: What next?

Rip it up and start again (which could be a good answer) is also the title chosen by Simon Reynolds for a recent book on the Post-punk of the beginning of the 80s, the years of a generation which made an extreme, brilliant attempt at a political and artistic resurrection. In this project, we restart from here, especially because the 15 actors were all born in the 90s, in a “generation whose every move was anticipated, tracked, bought and sold before it had even happened” (Mark Fisher).

In the aughts, the future we were expecting in the cultural sector has certainly not started, but we rather saw the rise of various forms of “retro-mania”, in the political sector and, once more, in the artistic-musical one: the more or less successful reunions, the cover bands, the coming back of vinyl and cassette tapes, contributed to the creation of a scenario where even the new characters look like a patchwork of previous phenomena. Rip it up and start again aims at making known the utopian impulses of this movement of youths, who at the time were exactly the same age as the students of La Manufacture, to contrast the fear towards the future fed by the media and the renunciative spirit instilled by the very school system, increasingly privatized. The confrontation with the Post-punk is almost a punch in the face and an invitation to start running forward, even without an established direction, and imagine irreducibly alien alternatives to the ruling neoliberism of the No Alternative.

How long can a culture persist without the new?
What happens if the youngsters are no longer capable of producing surprises? (Mark Fisher)

Connected to this minority movement, one can identify the origins of a series of fights and claims related to gender, to anti-racism, to cyber-feminism and to polymorphic sexuality which today are somewhat recognized by the opulent West of the alternative mainstream (we need only think of the Queer movement). And yet it is precisely in those years that the most extreme demands started to circulate in all artistic sectors. Those were also the years of a prolific, provocateur and “scandalous” creativity, later violently tamed by the introduction on the market of immense quantities of heroin that decimated many heroes and heroines.

We therefore look at those years, at the forms of fightback in the artistic field so that they can be engines for ideas about the Do it yourself, which is the soul of the Post-punk ethics.

Even then, the supremacy of goods was not challenged anymore, but it was critically re-read and re-interpreted to intervene on the very phases of the productive process. The Clash’s slogan was precisely “You can do it too!”. The difference is that now the web allows this to be actually done everywhere and at zero cost, but in the isolation of one’s bedroom in front of a live web-cam, while back then you had to get out of home, find a dump to meet, rehearse, create a graphic and maybe print out a fanzine… get moving and stand on your own two feet.

And all of this was written in the lyrics of an immense number of bands spread across Europe, many of which stayed strictly out of the market and which are more or less unknown, while others became super stars. Some of these songs are true poetic masterpieces, taking inspiration from many visionary artists of different historical periods.

We therefore invited the 15 actors to research, collect, immerse into the biographies and lyrics – enclosed in the obsolete vinyl records – of these tormented artists, from Ian Curtis to Lydia Lunch. So the dramaturgy was born: all the texts of this anomalous show-concert are original elaborations of the students themselves with regard to their life choices, theatre and the future which is waiting for them in the system of the show business (and of the world). Each of them “reacted” in a personal way to the confrontation with one of the 15 biographies of musicians which we proposed, not to nostalgically mythicize a period, but to revive these experiences questioning the relationship with one’s own time, the transgression and the artistic freedom…Reactivating the immortal spirit of the DIY! 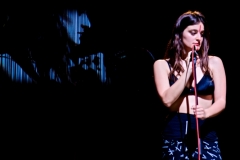 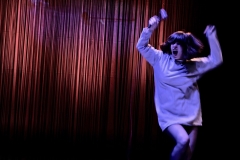 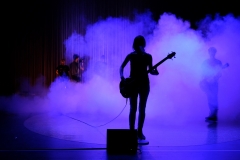 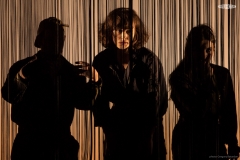 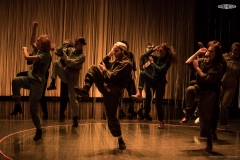 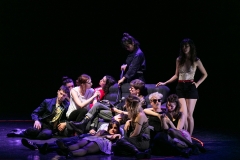 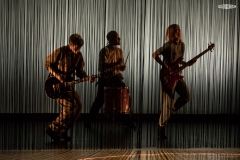 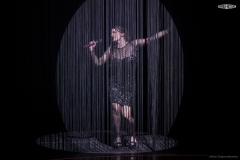 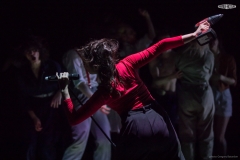 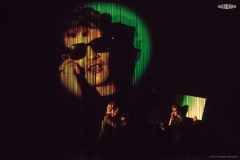 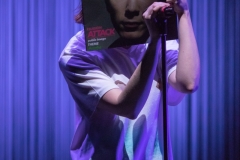 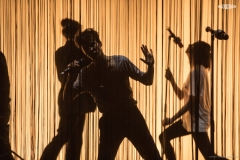 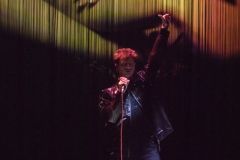 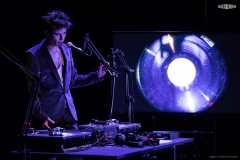 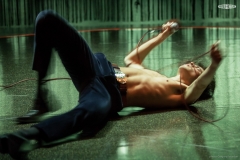 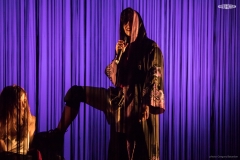 Go to the press review