A state of nameless excitement that charges the environment, / a yearning, / sinking into the darkness of the night, tumultuous, an intimacy between strangers, / and the rotten teeth, Wojnarowicz wanting to commit suicide, the heroin hole / and stillx
in the trembling in the sun, / then the unexpected, something sudden / the flashing of the water, of the river, that gives us a glimpse, just for a moment / and there is also the possibility of fear, / closing our eyes, becoming solx / and then finding ourselves in the all full of the mass of bodies / that exhausting joy.

The disturbances of memory, memory can only be disturbed – the interferences, the holes. Solitude, but perhaps in the plural: solitudes – much empty space around a body.

An aesthetics of collapse, the unregulated outdoors. Battuages.
We write about a utopia of bodies that we do not experience – that (we) do not have access to. Of a yearning desire to be many, of a glimmering of possible futures.
D.W. in one of his works sews together two pieces of stale bread, with a thread
red. To remake the whole, impossible – the whole is missing. To stop life, defer death.
Or maybe we could throw it all away. Nettles are lucky. They have so many discarded ideas to feed on.

I watched a documentary about an octopus. a short one. from the ‘60s. The voice spoke French, i understood little, nothing in fact. but it had a terrifying momentum, like a horror movie. i shuddered at the beginning of every sentence. the octopus had the same metallic granularity as the Technicolor film. because of the narrator, and of the soundtrack, it seemed like a murderer. it moved, dangerous, on the seabed, tentacular, slimy, but after all it was an octopus, he was doing his job. who knows if it was always the same octopus? i often wonder, watching documentaries. if the octopus whose adventures we are following, the squatting lion, the cockchafer are always the same one octopus, the same one lion, the same one beetle, or they are different individuals instead, filmed in different moments and maybe even in different places. would i be able to distinguish the one from the other? what is there, that we know how to distinguish for certain?

Silvia Calderoni is an actress, performer and author. She trained artistically from a very young age with the Teatro della Valdoca company, for which she was a performer in several productions including Paesaggio con fratello rotto. Since 2006 she has been an active part of the Motus company and performs in the shows Rumore Rosa, A place, ICS – racconti crudeli della giovinezza,
Crac, Let the sunshine in, Too-late, Iovadovia, Tre atti pubblici, Alexis. Una tragedia greca, nella tempesta, Caliban Cannibal, King Arthur, Tutto brucia hosted in national and international festivals. Silvia stars in The Plot is the Revolution alongside Judith Malina, the historical founder of Living Theatre. Since 2015 she has been touring with MDLSX alone, for which she also signs the dramaturgy together with Daniela Nicolò. In 2022 she is on stage again with Valdoca with Enigma. Requiem for Pinocchio. Awarded the 2009 Ubu prize for best actress under 30, on film she is Kaspar in La leggenda di Kaspar Hauser, a cult film directed by Davide Manuli (2012), and then in Last Words (2020) by Jonathan Nossiter, in the Sky series Romolus, directed by Matteo Rovere, and in Non mi uccidere (2021) by Andrea De Sica. She stars in RäDi Martino’s film and video opera Moonbird (2022).
She is associate artist of Queering Platform of the Kowloon Cultural District in Hong Kong and artistic consultant of Sherocco Festival (Ostuni).

Ilenia Caleo is a performer, activist and researcher. She has been working as an actress, performer and dramaturg in the contemporary scene since 2000, collaborating with various companies and directors. A philosopher by background, she is a researcher at IUAV in Venice and co-founder of the Master of Gender Studies and Politics at Roma Tre. She deals with corporeality, feminist epistemologies, experimentations in performing arts, new institutions and forms of cultural work. She collaborates with the research group of the project “INCOMMON. In praise of community. Shared creativity in arts and politics in Italy (1959-1979),” ERC Starting Grant.
She published the volume Performance, materia, affetti. Una cartografia femminista, Bulzoni 2021 e co-curato In fiamme. La performance nello spazio delle lotte 1967/1979, b-r-u-n-o 2021. She curated the dramaturgy of Tutto brucia (2021) by Motus and of Exinction / les Phalènes (2022) by choreographer Alexandre Roccoli.
An activist at Teatro Valle Occupato and in the commons and queer-feminist movements, she grew up politically and artistically in the underground counter-culture and social center scene.

Calderoni-Caleo met in 2012 at Teatro Valle Occupato in Motus’s Animale politico project and started a joint project between artistic residencies, research ateliers and performances. Since 2018 they have been teaching at IUAV in Venice in the Visual Arts Workshop. Starting from the Biennale College Teatro 2018 workshop, they gave birth to KISS (2019), a performance project with 23 performers, produced by Santarcangelo Festival, CSS Udine, Motus. For Hong Kong’s Queering Platform, they curate together the nomadic project SO IT IS. In 2021 they were part of Flu水o, a collective and cross-disciplinary project winner of the Italian Council (9th Edition 2020), presented in Milan and Soul.
In 2022 they created Pick Pocket Paradise, an environmental installation conceived for the exhibition “Espressioni con frazioni” at Castello di Rivoli Museo di Arte contemporanea (Turin).
In 2022, they presented a study of their latest performance work The present is not enough [first glimmer], co-produced by Azienda Speciale Palaexpo – Slaughterhouse | Project Take-Care, Kampnagel (Hamburg), Kunstencentrum Vooruit vzw (Ghent), Motus Vague, which debuts in Hamburg in January 2023.
Besides artistic projects, they share in truth a little bit of everything. 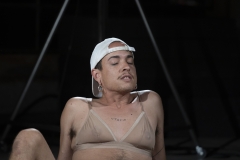 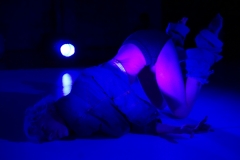 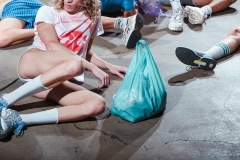 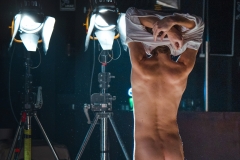