La Vaga Grazia is an allegory, the manifestation of something non-material.
In the performance we witness prismatic proximities; the epic that is being performed is not made up of earthly gestures and has no recognisable narrative other than the one created by relationships.

The attempt is to bring out on stage the particular attitude of bodies and minds engaged in difficult undertakings, working towards a form of freedom that allows the verisimilar to be glimpsed.
A dense network of sounds and rules enable the delicate spiritual matter – which inhabits the travelling bodies – to be seen, or perceived: the vision as a narrative form of the enterprise towards the unknown, towards a discovery that actually turns inwards in a specular movement that is completely intimate, unique and non-reducible.

The performance is inspired by the novel Mount Analogue and by the figure of its author, René Daumal.
Mount Analogue is said to be the only novel in the world that concludes with a comma, and there I seem to perceive the pendulum between the visible and the invisible that I am interested in rehearsing on stage and the continuation of writing on the body. A void that should not be filled but activated.

She studied art. She designs, performs and builds constructions.
In 2003 with Nicola Toffolini she founded Cosmesi theater company, invited in numerous Italian Fesivals (Drodesera, Santarcangelo, Crisalide, Short Theater) and international Institutions (Moscow, Uppsala, Tehran). She has worked for research companies such as Masque Teatro, Motus, Ateliersi, Teatrino Clandestino; played the accordion on the roof of the Angelo Mai; taught directing at the Academy of Fine Arts in Bologna and a laboratory at IUAV in Venice; built a shrine of smoke bombs for Ateliersi; accompanied a group of “Wild Detectives” with Silvia Bottiroli for a year; designed the cover of a BeMyDelay record; put a cast on her leg for Fuckups the festival of the inexplicable; made pirouettes for Jérome Bel at the Venice Biennale. She has worked as an assistant for stop-motion videos, murals and constructions by other artists. She had two solo shows with bizarre titles in Bologna and Santarcangelo; she has worked as assistant director for a show by Giuliana Musso. She holds theater workshops not only in schools, and collaborated with Ert for the project Fuori curated by Silvia Bottiroli. She has published her poetic texts in the guide on Friuli Venezia Giulia region The regimentation of the waters and Cubs of Dragons, has organized the Conferenze Santarcangioline, a workshop on Trap and Russian Romance with Dario Moroldo, and is part of the DonnaCirco musical project.

She is an associate artist of Spazio Kor (Asti) for the next two years. Her last work with Cosmesi was to record a pop record and then dig a hole, while in 2022 she debuted as solo director with the title La vaga Grazia. 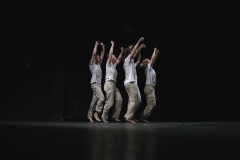