Keeping our eyes open and reacting to the facts like wolves in the forest, fast, without leaving traces, venturing alone, away from the pack, or moving in a pack as a single body… Building shelters, other-spaces from which to observe and, in the unfathomable, manufacture new docks, to re-locate Today and imagine fluorescent Tomorrows. We wonder: what is the future prefiguration scaring us the most? The answers found are many and manifold, but they all share common core: control, and material or surreptitious reduction of (political and artistic) freedom. We began our research into surveillance apparatus, from control cameras to systems detecting “criminal” or suspicious intentions, finding thousands and thousands of Web pages advertising increasingly advanced and sci-fi security systems… And itʼs true: tomorrow is already here.

Where. Am. I. And When? P.K. Dick and Michel Foucault are indicating us the road… It is indeed this experiment that has led us to the figure of Prospero, to the point that Shakespeare’s “The Tempest” has now become the background noise of our most recent production “Nella Tempesta” which opened at “Fta Festival Transameriques” in Montreal (CA) on May 24, 2013.

Let your indulgence set me free “The Tempest” W. Shakespeare.

When is a fast-paced dialogue between director and actor about scenic freedom, about the dichotomy between inside and outside, movement and control, disobedience and compliance, also as a reflection around the controversial proliferation of surveillance equipment, and around “the obsessive digitalization” of public (and private) spaces.

Enrico Casagrande, one of Motus’s two directors, sits at his computer back to the audience. He opens a new page, a New Empty Document, with the anxiety and the fear brought by each new beginning. From his computer, he controls three surveillance cameras located in close external areas, while writing live what he observes. Silvia Calderoni moves around those three spaces under video surveillance, and thanks to a radio-mic (located so that it also amplifies her heart beat) she communicates with Enrico, and simulates experiences connected to the feeling of being under control “like a domestic animal” (airports, banks, etc). She imagines different situations of oppression and subsequent flight, and gives instructions to Enrico himself who, “heterodirected”, executes some acts with which he comes into relationship with the audience.
It is a game of Chinese boxes in which we lose grip of who controls and who is controlled, like in A Scanner Darkly by P.H. Dick… The loss of control on one’s time and space, on one’s body are the prodromes of a lot of dystopic science-fiction.
The dynamics between inner and outer space is brought to another level of complexity through philosophical digs inspired especially by Foucault (“Discipline and Punish” and “Utopian Body”), while the audience closed into the theatre is “physically” immersed in the device.

When is a part of the 2011>2068 AnimalePolitico project, an enlarged and visionary front of observation articulated through different performative actions and residency-workshops (Mucchio Misto Worrkshop) in different European and North American cities. It is a long path inaugurated in 2011 with The plot is the revolution, the dialogue-confrontation between Silvia Calderoni and Judith Malina of the Living Theatre. When magnifies the sense of this exploration; we presented it as part of the “W. 3 atti pubblici” tryptic at the Dro Festival and at Short Theatre in Rome. It was introduced by Where, an Assembly-Act enlightened by witnessing and utopian leaps of a multitude of artists/activists/friends (Angelo Mai Altrove Roma, Ex-Asilo Filangeri Napoli, Macao Milano, Nuovo Cinema Palazzo Roma, Sale Docks Venezia, Teatro Valle Occupato) that are creating networks in the asphyxiating Italian cultural system and trying to invent a new language… When was then followed by Who: a nocturnal choral Act, in which performers and audience members melt into an orgonic quasi-dance.

My body is like the City of the Sun. It has no place, but it is from it that all possible places, real or utopian, emerge and radiate. Michel Foucault , “Le Corps utopique” Conférence radiophonique sur France-Culture,1966 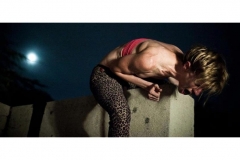 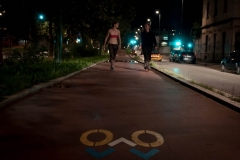 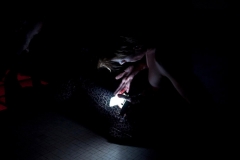 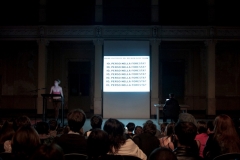 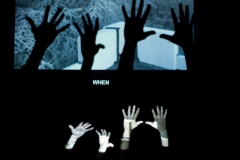 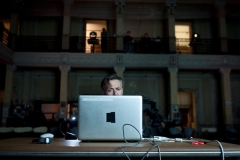 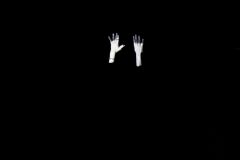 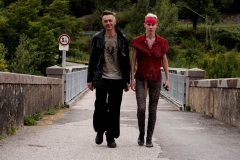